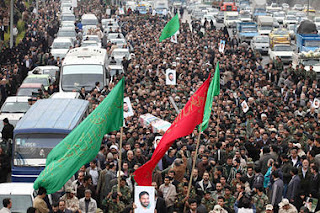 Iran hasn't accused Israel of causing the bomb blast at an ammunition depot near Tehran, and Israel hasn't taken credit. But the blast, which killed the founder of Iran's missile program, fits a pattern.

Iranians carry a picture and coffin of Hassan Moghaddam, a Revolutionary guards commander, who was killed during a blast in a military base, in Tehran, Iran, Monday.
Iran today buries a senior commander of its missile force, amid claims that the huge explosion that killed him and at least 16 others at a Revolutionary Guard base on Saturday was the work of Israeli agents
Maj. Gen. Hassan Moghaddam was heralded by fellow commanders as the "founder" of Iran's missile program, which has deployed ballistic missiles with ranges up to 1,500 miles -- enough to reach Europe. The Islamic Revolutionary Guards Corps (IRGC) praised his role in developing artillery and missile units. His importance was such that even Iran's supreme leader Ayatollah Ali Khamanei attended the funeral.

That background would make Moghaddam a prime target in what appears to be a concerted Spy vs. Spy campaign – from assassinations and facility explosions, to three destructive computer viruses, by Iran's count – that have dealt setbacks to Iran's controversial nuclear and ballistic missile programs in recent years. Speculation that Moghaddam was the latest casualty, in the series of strikes that Iran blames on Israel and the US, has been spurred by the fact that such a critical Guard officer was present and killed, during what Iran calls an "accident" involving a routine transfer of munitions.
"Iran's current missile capability is owed to commander Moghaddam's efforts," Brigadier General Abbas Khani told the official IRNA news agency.  "Due to his role ... the enemy always wanted to identify and eliminate him," he said.
Iran has in the past blamed the "Zionist regime" and the US for being secretly behind what it styles a campaign of sabotage. Neither the US nor Israel have ruled out military strikes to prevent Iran acquiring a bomb. Analysts say the death of Moghaddam may be part of a broader, unconventional fight that has been on-going for years.
"Without concluding that this was an assassination, it fits in line with the kind of actions that have...deprived Iran of some of its top influential leadership" in nuclear and missile efforts, says Mark Fitzpatrick of the International Institute for Strategic Studies (IISS) in London. "Missiles are a major component of having a nuclear weapons capability, and this is the first time that we've seen some hint that the missile aspect is bearing the brunt," says Mr. Fitzpatrick, who edited a comprehensive 150-page dossier on Iran's ballistic missiles earlier this year.
The Islamic Republic insists its nuclear program is only to produce energy. Yet the latest report on Iran's efforts by the UN's watchdog International Atomic Energy Agency (IAEA), released last week, found a "systemic" effort by Iran to master weapons-related nuclear work, until it was halted in 2003.
Though some experts question the validity of the IAEA intelligence, the IAEA claimed that some weapons-related work "may" still continue.
Pubblicato da Studi ME Africa a 11:35 PM