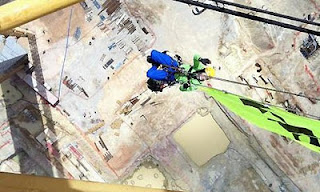 Greenpeace activists chained themselves to a gate and climbed a crane Monday at a South African coal-fired power station to protest dependence on coal, weeks before the country hosts a global conference on climate change.
Melita Steele, a Greenpeace climate change expert, said the protest started at dawn Monday at the Kusile power station with activists chaining themselves to the gates of the construction site. Security guards later cut the chain. Steele said six activists climbed a crane at the site and were dangling there from ropes with a banner declaring: "Kusile – climate killer."
Eskom, the state-owned power company, says it needs Kusile because of rising electricity demand. The plant is expected to be completed in 2016. Another coal plant, called Medupi, is scheduled for completion in 2015. Eskom also has renewable projects planned.
Eskom's coal-powered electricity plants are the main source of greenhouse gas emissions by South Africa.
"Construction should be stopped and investment should be shifted to renewables," Steele said in a telephone interview. Greenpeace says the protesters will try to spend the night at the plant.
Eskom spokeswoman Hillary Joffe said the utility agrees that South Africa should reduce its greenhouse gas emissions and is moving toward green technology and cleaner coal. But she said South Africa also needs to develop, and that cheap coal is an important part of its energy mix.
Greenpeace argues that coal would not be considered cheap if the costs of pollution, health problems, water use and climate change are factored in.
The World Bank has approved $250m in funding for to help Eskom build solar power and wind power plants, and approved a $3.75bn loan to Eskom for the Medupi plant.
Pubblicato da Studi ME Africa a 1:41 PM