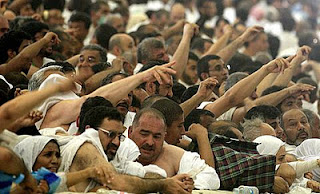 Muslim pilgrims cast stones at a pillar, symbolizing the stoning of Satan, in a ritual called "Jamarat," the last rite of the annual hajj, in Mina near the Saudi holy city of Mecca, Saudi Arabia, Nov. 6, 2011.

Saudi officials say more than 2.5 million Muslims this year have made the journey for Hajj, the annual pilgrimage to Mecca. Hajj is the oldest and most sacred ritual of Islam, required by all physically-and-financially-able Muslims.  Mecca is the birthplace of the Prophet Mohammed.
Hundreds of thousands of Muslim pilgrims stoned Satan Sunday after gathering in a valley near the Saudi holy city of Mina.  Each pilgrim must throw 21 pebbles at each of three pillars, representing the devil.
After the stoning ceremony, the pilgrims go to Mecca's Great Mosque to walk around the Kaaba, a cube-shaped structure into which is set the Black Stone, Islam's most sacred relic.
Sunday also marks the start of Eid al-Adha, or the Feast of Sacrifice, in remembrance of Abraham's near-sacrifice of his son.
Saudi Crown Prince Nayef bin Abdel Aziz said a record 1.8 million foreign pilgrims had arrived in the kingdom by Friday, representing 183 nationalities. The foreigners joined hundreds of thousands of Saudi Muslims taking part in the ritual, which is one of the five pillars of Islam.
Coping with the world's largest annual human assembly has posed a security nightmare for Saudi Arabia. The oil-rich nation has invested billions of dollars over the years to avoid deadly stampedes that have marred the Hajj in the past.  In July 1990, 1,426 pilgrims were trampled to death in a stampede.
The Hajj is being streamed live at youtube.com/hajjlive.

Some information for this report was provided by AP, AFP and Reuters.
Pubblicato da Studi ME Africa a 10:56 PM