By Sean Jacobs and Tom Devriendt – Africa is a country 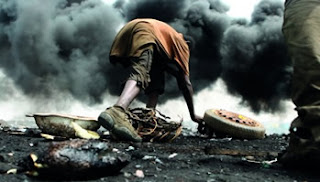 As part of a series of year-end posts–we’re taking a break from Friday, December 23, till January 5, 2012–we’re planning to post at least 10 “Lists of 10″ this week. (We’re trying to be cool by calling it “10×10″). So two lists per day. Orlando Reade, who blogs for us from London, starts us of with his list of 10 photographers to watch in 2012. He’s picked five African artists and five Europeans who have been working in Africa.

Nyaba Leon Ouedraogo’s (born Burkina Faso, 1978) L’enfer du Cuivre (image above) and Pieter Hugo’s (born South Africa, 1976) Permanent Error series both document life in and around the technology dump in Agbobloshie, Ghana.
Lien Botha’s (born South Africa, 1961) 2009 Parrot Jungle series, exhibited at this year’s Bamako biennial, explores the iconography of natural history. Her images, carefully and oddly juxtaposed objects, possess the aura of an old cabinet of curiosities.
Nii Obodai’s (born Ghana, 1963) work, From the Edge to the Core, was exhibited at the Bamako biennale. The 2009 series, Who Knows Tomorrow, a collaboration with the Algerian-French photographer Bruno Boudjelal explored the political legacies of Kwame Nkrumah’s independent nation through landscape portraits of urban and rural Ghana.
Daniel Naudé (born South Africa, 1984) makes portraits of animals in strange relation to their landscapes. His Africanis series focused on the wild dogs of the Karoo.
Cecile Mella’s (born France, 1983) series ‘Fictional Cape Town’, captures the misfigured and fantastical portraits of the city at the edges of advertising photo-shoots and film-sets.
Jordi Cami’s (born Spain, 1955) images of the industry of manual transporting at the border of Spain and Morocco, and infant refugees in Sudan, make intimate reportage of physical life in these communities.
Four years ago, Yan Gross (born Switzerland, 1981) started making a series on a group of skateboarders in Kitintale, a suburb of Kampala, who built what Gross claims is the first skatepark in East Africa. The project is ongoing.
Andrea Stultiens (born Holland, 1974) has been working and teaching in Uganda for the last few years, engaging with local artists through the Bayimba Photography Workshops. The Kaddu Wasswa Archive is a series devoted to one man’s life, compiling documents from his past with new photographs. This work, made in collaboration with Wasswa’s grandson, the photographer Arthur C. Kisitu, indirectly makes a history of the first fifty years of independent Uganda.
Alfredo d’Amato’s (born Italy) series, ‘The Sound of Kuduro’, explored the Kuduro (translated as “hard ass”) music scene in Luanda, Angola. It was exhibited at this year’s Lagos Photo. Amato’s ‘Early Days of Spring’ contains eloquent portraits of Tunisia after the end of Ben Ali’s regime. His recent work in Mozambique can be seen here.
Pubblicato da Studi ME Africa a 2:51 PM