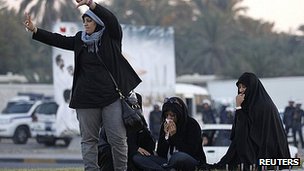 Police in Bahrain have detained prominent blogger and rights activist Zainab al-Khawaja during a protest near the capital Manama, reports say.
Security forces fired tear gas and stun grenades to disperse hundreds of anti-government protesters trying to block a main road, according to witnesses.
The Gulf kingdom's Shia Muslim majority have staged regular protests in the past 10 months demanding more rights from the Sunni-dominated monarchy.
King Hamad has pledged reforms.
The latest unrest comes during a visit to Bahrain by the US state department's top human rights envoy, Michael Posner.
He welcomed moves by King Hamad to address rights abuses, but urged him to do more.
Ms Khawaja, a prominent human rights activist and the daughter of a senior opposition figure, had refused to leave a sit-in at a roundabout on the Budaiya highway west of Manama after other protesters had been dispersed, witnesses said.
She was handcuffed and led away by police along with at least one other woman protester, reports said.
Earlier she had tweeted: "Sitting in a roundabout on Budaiya street, shouting down down Hamad. Until now riot police don't seem to know what to do. A few girls have joined me now."
So far there has been no official confirmation of her detention.
Heavily guarded
Budaiya road connects a string of largely Shia villages west of Manama and leads to a junction south of Manama's Pearl Roundabout, which was the focal point for earlier protests.
Correspondents say the heavily guarded square holds great symbolic value for the opposition movement and protesters have repeatedly tried to retake it.
Earlier, Mr Posner, who heads the US Bureau of Democracy, Human Rights and Labor, praised King Hamad for taking steps to implement reforms.
The reforms were recommended in a report published last month that outlined human rights abuses carried out by the government.
He said Washington remained concerned about the government's "excessive use of force, including tear gas, in response to ongoing street protests".
Bahrain, considered a strategically important Gulf nation, hosts the US Navy's 5th Fleet.
Pubblicato da Studi ME Africa a 1:03 AM