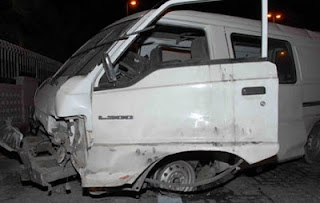 A small bomb went off near the British Embassy in Bahrain’s capital Manama yesterday. The relatively small device went off underneath a bus parked 50 meters away from the Embassy.
Some points to note:
This incident comes at a time of tension between the UK and Iran (re: embassy bootings out) and during the Shia festival of Ashura.
Nevertheless, without wishing to be fatuous, no one can say with 100% accuracy that the British Embassy was the target. 50m is no small distance. Of course, it is likely, but if you’re that close to the Embassy why not lob it over the wall or leave it next to the wall/gate – anything other that sticking it under a bus?
I shudder to think of the hay that the Bahraini authorities will make with this; adding to their already notable molehill of ‘evidence’ of Iranian nefariousness in Bahrain.
If the Iranians wanted to attack the British Embassy in Bahrain (or elsewhere) I would suggest that they could – so to speak – do a damn sight better job than a home-made explosive device left under a bus vaguely near a British Embassy.
If the Bahraini authorities really want to push this line about this being proof of Iranian influence in Bahrain, then I suggest that this augers for just how little influence they have.
If this incident was done by someone with links to or sympathies with Iran (which is, of course, perfectly possible) then this person either:
1) Is incredibly dim (see point 3) in that now the Bahraini authorities will have yet more excuse in their eyes to crack-down further should they so choose.
2) Is rather Machiavellian (see point)
3) in that they are trying to draw on more of a repressive response from the Bahraini authorities. Either which way, the Bahraini police ought to pursue a measured response.
Pubblicato da Studi ME Africa a 11:48 AM