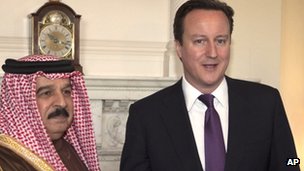 Bahrain's king has been in the UK on a charm offensive
In the wake of a highly publicised meeting between Bahrain's King Hamad and British Prime Minister David Cameron, critics in the country remain sceptical about reform.
Many in the Bahrain opposition see a committee that was set up by the king to oversee recommendations for change as being irrelevant.
They point to the fact that the leaders of two of the main political societies remain in jail along with a prominent human rights activist.
As one activist put it: "You cannot have political reform without them being part of the process - it's farcical." The activist asked not to be named for fear of reprisal.
Ibrahim Sharif, the leader of the secular party Wa'ad, Hassan Mushaima and Abduljalil Singace of the Shia party Haq and the prominent human rights activist Abdulhadi al-Khawaja are all serving long prison sentences.

They were convicted of trying to overthrow the government but international observers believe they are innocent of all charges.
There is strong evidence that they were tortured in detention.
The opposition say that releasing the men would be a sign that the king was serious about reform.
They also say that the more than 1,000 people - almost all Shia - who were sacked from their jobs for supporting calls for reform should be immediately re-instated.
"That's not happening," Mansoor al-Jamri told me. Mr Jamri is the editor of al-Wasat, the only independent newspaper in Bahrain. He called the sacking of Shia a form of apartheid.
"Releasing political prisoners, restoring people's jobs - these are easy steps, if the king is serious about meaningful change," the activist told me.
But the politician reality in Bahrain dictates that at best the king can only proceed very cautiously.
His uncle, the world's longest serving prime minister, and others in the royal family are said to wield real power.
Pubblicato da Studi ME Africa a 11:03 PM