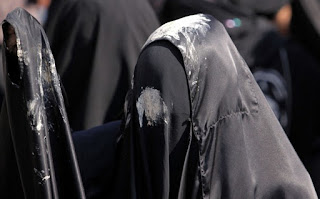 MANAMA, Bahrain — Bahraini security forces firing tear gas and rubber bullets clashed Wednesday with hundreds of anti-government protesters near the former epicenter of the Gulf kingdom’s uprising.
Opposition supporters who had gathered in Shiite villages around the capital Manama for a religious procession to mark the holy days of Ashoura marched on Manama’s Pearl Square, a heavily guarded intersection that was the heart of the Shiite majority’s campaign for greater rights from Sunni rulers.
The square carries great symbolic value, and security forces violently prevented the protesters from reaching the square Wednesday. There were no immediate reports of injuries.
Bahrain has seen sporadic protests since the government, backed by neighboring Saudi Arabia, forcefully put down the uprising in this strategically important Gulf nation earlier this year.
Bahrain’s Health Ministry said in a statement that a 27-year-old woman who sustained head injuries during “rioting” last month in a Shiite village near Manama died in a hospital early Wednesday. Bahraini rights groups say the woman was fatally injured in the head by a metal rod during a November protest and that security forces are responsible for her death.
More than 35 people have died in clashes and protest-related violence since the unrest, inspired by revolts around the Arab world, began in February when the uprising.
Ashoura marks the anniversary of the death in the seventh century of the Prophet Muhammad’s grandson Imam Hussein. His death in a battle outside Karbala sealed Islam’s historical Sunni-Shiite split, which still bedevils the Middle East.
Bahrain’s security forces stormed the protesters’ encampment at the landmark square in March after authorities imposed martial law to quell a wave of anti-government demonstrations and marches.
Pubblicato da Studi ME Africa a 1:00 AM