Jan.23 (GMM) Bernie Ecclestone sounds fully committed to formula one's highly controversial return to Bahrain in April.
The 2011 pre-season test and race were cancelled due to unrest within the island Kingdom, and some insist those troubles are not yet over.
But the event's return this year has been definitively scheduled, and F1 chief executive Ecclestone sounds committed.
"Lots of people are talking badly about that part of the world," he told Salzburger Nachrichten newspaper, whilst attending the Kitzbuhel downhill skiing event in Austria. 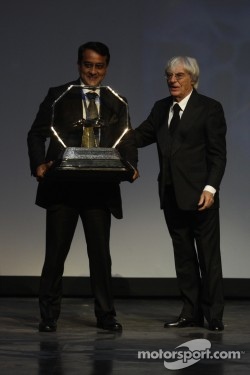 
"But Bahrain is the country in the Arab world in which there are the fewest problems," the 81-year-old insisted.
There are a cluttered 20 events scheduled on the 2012 calendar, but Bahrain is not the only one with a question mark hanging above its race date.
There are fears Korea's organisers are already losing interest, doubts about construction of the new Austin venue, and European races in Spain, Germany and elsewhere facing economic problems.
Ecclestone does not seem worried.
"We could do deals today with five new promoters," he revealed. "The demand is high -- there is great interest from Mexico.
"But more races costs more, also for the teams who probably would have to increase their staff a lot. But we could find solutions," said Ecclestone.
Pubblicato da Studi ME Africa a 10:38 PM