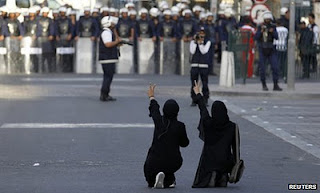 BBCNEWS
Bahrain's leading Shia Muslim cleric has told his followers to retaliate if women are attacked, in a warning to the country's security forces.
In a sermon delivered at Friday prayers Sheikh Isa Qassim said: "Whoever you see abusing a woman, crush him."
The outburst has added to growing tension in the Gulf island state.
Shia protesters have faced the brunt of the security crackdown un the past year, as the Sunni monarchy attempts to cope with their demands for reform.
Activists have highlighted and circulated amateur videos showing women being beaten and arrested by male security officers since protests erupted in the capital Manama in February.
In a passionate and angry sermon, a video of which has been seen by the BBC, Sheikh Qassim said on Friday: "Let us die for our honour."
"How do they who do this to people expect the people to remain silent and not defend their rights and honour?" he asked.

Sheikh Qassim had previously been seen as a moderate, counselling peaceful protest and urging people to avoid violence.
But correspondents say his sermon reflects the growing anger in the Shia community at what protesters see as the government's failure to curb its security forces and commit to meaningful reform.
Following the sermon, which received wide coverage on social media websites, thousands took to the streets of Manama to protest against the Sunni-dominated government of King Hamad Bin Isa al-Khalifa.
In predominantly Shia villages, tyres were set alight. Witnesses said the sky above the capital was filled with smoke.
A motorway into Manama was also reportedly shut and thousands were said to be marching in the streets.
Pubblicato da Studi ME Africa a 11:19 PM