There is a theatrical tendency in Italy, which is part of our charm and at the root of our problems - and not just on the high seas. But things are changing, at last.

Italy seems to have a knack for plunging into spectacular messes. It’s not the only European country to face problems lately - quite the reverse, it seems a popular pastime at the moment. When things go wrong below the Alps, though, they produce perfect images for the world’s front pages. First Naples’ piles of smoking rubbish, then Silvio Berlusconi’s scores of pouting girls. And now the awesome pictures of a huge, white cruise-ship, beached like a whale off Tuscany’s charming Isola del Giglio.

The sinking of Costa Concordia has been a tragedy - more than 30 people are dead or missing - and an embarrassment. The heroism of most of the crew does not cancel the fact that rescue operations were tardy and chaotic. A passenger list has not yet been produced. The ship’s captain, Francesco Schettino, disembarked early, leaving hundreds of people behind (he is now under house arrest). His taped conversation with Captain Gregorio De Falco at Livorno Port Authority - who shouted “You... get back on board!” - has gone viral. The exact Italian wording is now available on T-shirts.

The temptation to grab for lazy monetary metaphors about “sinking Italy” is obvious but it must be resisted. Yet something can be learned about Italy from the Costa Concordia disaster; it just needs a little introduction.

Why did the ship sail so close to Giglio and into its shallow waters? Because her captain, Mr Schettino, wished to please chief steward Antonello Tievoli, whose family lives on the island. He proposed an inchino (a sail-past, literally a “bow” or “curtsey”): the huge cruiser - carrying more than 4,000 passengers and crew - would show up and show off with lights glittering and sirens sounding. At 9.08 pm, just one hour before the ship ran aground, Mr Tievoli’s sister, Francesca, posted on Facebook: “In a little while the Costa Concordia will sail so close so close...”. It turned out that the ship did the same on her previous passage in front of the island, on January 6th.

Once again, an Italian fell into the trap of “la bella figura” - this time, with tragic consequences. La bella figura, the beautiful figure: only in Italian does there exist an expression like this. It means making “a good impression”, in an aesthetic sense. Too often, both in public and private, we confuse what is beautiful with what is good; aesthetic appreciation sweeps ethics aside. Leo Longanesi - a perceptive Italian columnist, our H.L. Mencken - once wrote: “Gli italiani preferiscono l’inaugurazione alla manutenzione”- Italians prefer openings to maintenance. There is a lot of truth in this. It’s not a verdict, but a warning. 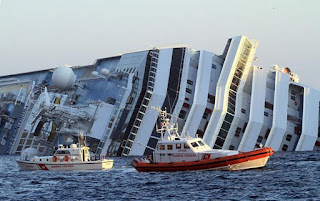 There is a theatrical tendency in Italy, which is part of our charm and at the root of our problems - and not just on the high seas. Some of the current financial problems stem from lax controls - tax evasion (estimated at over €200bn a year), illegal exportation of capital (some €130bn is said to be hidden in Swiss banks), and corruption. Successive governments made clear that they didn’t really care. Leaders told voters only what voters wanted to hear. Wrongdoers were threatened with frightening, lengthy and unlikely punishments, whereas sanctions should be moderate, certain and swift. Mr Berlusconi was a virtuoso in this sort of vote-winning trickery.

Surprisingly - but only for those who do not know the country well – most Italians accepted the new state of affairs. The tough new austerity measures hit hard, above all the changes to pensions and property taxes, but they did not provoke a panicking, emotional response, as in Greece. This is opera, not drama; we can tell when the fat lady is about to sing. Or, if we want to stick to current metaphors, we can see the rocks below the surface.

That’s why Costa Concordia’s Francesco Schettino is now a villain. He didn’t see it coming; and, when it came, he couldn’t cope and he ran away - not a bella figura, at all. Italians today are all for Captain Gregorio De Falco who shouted Vada a bordo, cazzo! Because this is where we want to be: on board, safely in Europe and within the eurozone. Possibly without hitting the bottom first.