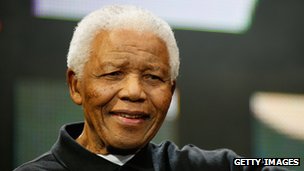 A mini-series based on the life of Nelson Mandela is in the pipeline, with producers including the former South African president's grandson.

Writers attached to the project include Nigel Williams, who wrote the 2005 Helen Mirren mini-series, Elizabeth I.
Mr Mandela and his family will give input and feedback on the script for the six-part series.
His grandson Kweku Mandela said his grandfather's response when told of the plan was: "How much am I getting paid?"
Shooting will begin in South Africa later this year.
Two of Nelson Mandela's books will be used as source material - the memoir Conversations With Myself and a compendium of quotations, Nelson Mandela By Himself.
The working title is Madiba, the tribal clan name which Mandela is known by in South Africa.
Kweku Mandela said the series would not paint his grandfather as "Mandela the saint" but would seek to "unravel Mandela the man".
It will follow the life of the former leader - from his early relationship with his mother, to his engagement with politics, imprisonment and finally his election as president of South Africa.
The project is being put together by three companies across the globe - the UK's Left Bank Pictures, Canada's Blue Ice Films and South Africa's Out of Africa Entertainment.
Left Bank Pictures is behind films such as football drama The Damned United, while its TV credits include Wallander, starring Kenneth Branagh.
Casting for the Nelson Mandela series has yet to be announced.
Pubblicato da Studi ME Africa a 1:29 AM