by Sean Jacobs - AFRICA IS A COUNTRY 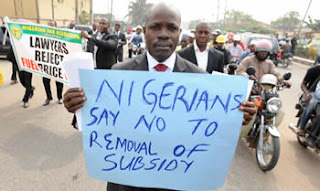 Nigeria’s political leaders probably did not expect this kind of response from the populace –mass protests, a national strike starting today that shut down major cities–when they decided, on January 1, 2012, to scrap fuel subsidies (as part of “reforms” to deregulate the oil sector).
The rationale was that by freeing money spent on the subsidy they could spend it on infrastructural improvements.
The problem is Nigerians people don’t trust the government or overpaid public representatives with taxpayers’ money. That the price of fuel doubled overnight increasing transportation and energy costs and food prizes. For a week now police have faced down mostly peaceful protests culminating with a national strike organized by the country’s major trade unions, the Nigeria Labour Congress (NLC) and the Trade Union of Nigeria (TUC).
Not even brief, though fatal, attacks by terrorist group Boko Haram (targeting Christians) could derail the protesters. (In some instances Christian protesters protected praying Muslims.) And in what is now a standard for political struggles on the continent, the Nigerian diaspora protested in a Western capital, this time in London. (The link provides video evidence; see also here.)
Nigerian entertainers have also been forced to take a stance; like Dbanj, Don Jazzy and Banky W. Seun Kuti (he was on Al Jazeera today discussing the fuel subsidy crisis) and Dede Mabiakwu (who played in Fela’s band) joined marches.
Producer Don Jazzy also came out in support of the protests. Even Chinua Achebe condemned the government. When popular Nollywood actress Genevieve Nnaji declared her support for the cuts, her fans tweeted their displeasure. The protests are probably the largest in any Sub-Saharan African country in a long while.
The real focus of the anger is Nigeria’s political class, especially President Goodluck Jonathan (known as “bad luck” to protesters) and finance minister Ngozi Okonjo-Iweala (she can’t hide her irritation with protesters). Okonjo-Iweala was lampooned by bloggers and on twitter. Protesters scoff at Jonathan’s responses — cutting ministers’ travel and salaries, introducing 1000 diesel buses. So has been the popular response to the Congress’s motion to ask Jonathan and his cabinet to reverse their decision on the fuel subsidy and calling for wider consultations around the reforms. Instead the national strike went ahead.
I’ve been disappointed by the intermittent coverage in Western media, mostly focusing on violence associated with protests or rationalizing the subsidy cuts. (Some media only covered Boko Haram’s violence last week.) “Expert” opinion in the West supported Jonathan and Okonjo-Iweala. Jeffrey Sachs, special representative to the UN on an official visit to Abuja, congratulated Jonathan on the decision. Not surprising since we know Sachs’s record on deregulation. By Sunday, however, the UN — probably aware of the record of Sachs’s recommendations — distanced itself from his remarks.
The Harvard MIT internet analyst Ethan Zuckerman, who has been writing on social media and protest, blogged on Friday that Occupy Nigeria was “a reactionary Occupy Movement,” dismissed their analysis of the situation as “oddly partisan” and had high praise for finance minister Okonjo-Iweala (he called her “internationally celebrated”). Zuckerman ended by writing: “Occupy Nigeria is a conservative movement fighting to keep a dysfunctional status quo in place, which seems at odds with other branches of the movement.” Nigerians were quick to challenge Zuckerman on his blog and on twitter — some ad hominem (sample comment: “you are obviously very clueless about Nigeria or Nigerians”), but others had more valid criticisms — his silence on the role of Western oil firms in the oil sector, misrepresentation of Occupy Nigeria, his support for deregulation, and his strange dismissal of the protesters as rightwing and reactionary. (Alex Thurston of Sahel Blog has a good takedown of Zuckerman’s positions here.) By Sunday, Zuckerman, stung by the criticism, backtracked on some of his views. A case of his own medicine.
I am hoping the coverage gets better. Al Jazeera English, while they have a correspondent there and made it their lead all day, have not shown the same round the clock dedication to live covering the protests as they have done in North Africa, though it has wide appeal. (To their credit, Al Jazeera’s “The Stream,” focused on Nigeria earlier today; guests included Seun Kuti.) Meanwhile, Nigerian sites in the diaspora like Sahara Reporters have presented comprehensive coverage. And Jeremy Weate of Naijablog has a great take on why now and speculates on how this will end:
… Nigerians have never been so united in years – last week, in the unofficially renamed Liberation Square in Kano, Christians guarded the space as their Muslim co-protestors prayed. In return, last Sunday, Muslims guarded Churches as others prayed inside.
What we are witnessing with Occupy Nigeria is a generational transfer, as young, social-media enabled activists gradually take over the baton from unionist stalwarts. Nigeria’s young population is increasingly letting go of the deferential attitude of their parents generation. In the south at least, young Nigerians are beginning to ask questions of the religious leadership that has been complicit with the status-quo. At long last, there is accountability pressure building up in the system.
In the short term, following on from the next few days of protest and shut-down, it’s hard to imagine anything other than a policy reversal, and a planned withdrawal being announced, in step with a clear programme of projects that must be delivered before any further withdrawal of subsidy is implemented … Even at this very late stage, President Goodluck could become a hero of the process. Come what may, underlying events this week a deeper shift is at work: a new generation of Nigerians well versed in events to the north in Tunisia, Egypt and Libya is demanding that the terms of the social contract in Nigeria are re-written, in favour of increased accountability in political leadership.
Pubblicato da Studi ME Africa a 1:04 AM