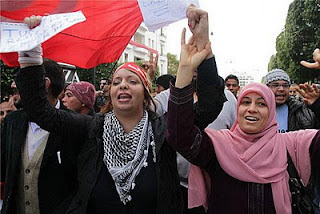 A year ago - on January 14, 2011 - Habib Bourguiba Boulevard in downtown Tunis was a sea of humanity. People young and old, professors and farmers, demonstrated for reforms and for long-time President Zine el Abidine Ben Ali to step down. Within hours, Ben Ali was gone, fleeing by airplane to Saudi Arabia where he and his wife now live in exile.

Tunisia's historic revolution inspired similar "Arab Spring" uprisings across the region. Many were bloody – like the one in Syria, which continues today.

Tunisia's revolt was largely peaceful. Still, there were weeks of clashes pitting youths against police - or shadowy remnants of the old regime - and unrest continues.

In October, Tunisia held its first truly democratic elections - a vote hailed by international election observers - that ushered in the current coalition government led by the moderate Islamist Ennahda party.

But Tunisia marks the first anniversary of its revolution with as much worry as pride. Tunis-based economist Mahmoud Ben Romdhane says that on some level things have not improved.

"The youth made this revolution in order to have their problems solved. They wanted dignity, they wanted jobs. [But compared] to the situation [a year ago], the economic and social situation has worsened," he said.

Today, Tunisia's unemployment rate is 19 percent nationally - soaring to 50 percent in some areas. Growth is dismal, foreign investment is down and the country's key tourism industry is still struggling.

Marking the anniversary, hundreds of Tunisians gathered in the capital Saturday demanding jobs.

Romdhane says the dominant Ennahda party is not providing realistic solutions to the crisis.

“Since they have taken power, they haven't presented any economic perspective, any budgetary perspective," he said. "They have only taken the documents presented by the previous government."

Ben Ali is gone, but not forgotten. He is reportedly planning legal action to recover millions of dollars of seized assets after he fled. The widespread corruption under his tenure - one of the reasons he was ousted - remains.

Rights advocates also worry about hardline Islamists, who remain a small but increasingly vocal group in this generally Western-oriented nation.

Interviewed by France 24 TV, Belhadj said that after half a century of progress for Tunisian women, some are now calling for a return to polygamy among other rollbacks. But she says those calls remain limited - and that the Ennahda-dominated government does not have a free hand to change progressive laws.

"They are threatening our way of life. What they want to do is to change the Tunisian way of life," he said. "But the civil society is really a vibrant one and is opposing their threats."

Despite his worries, Romdhane will join this weekend's celebrations. While he believes it will take years for Tunisia to emerge from its difficulties, he says he is looking ahead with joy and with hope.
Pubblicato da Studi ME Africa a 10:12 PM