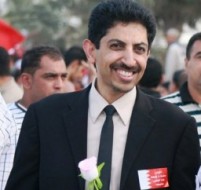 The Bahrain Youth Society for Human Rights (BYSHR) calls on international
human rights organizations to urgently intervene to secure the release of human
rights defender Mr.Abdulhadi Alkhawaja (Previous President and acting
director of the BCHR) who is to enter his 21st day of hungerstrike tomorrow.


Mr.Abdulhadi Alkhawaja had began the hungerstrike demanding “Freedom or Death” on the
8th of February which followed a 1 week hungerstrike just 2 days before which
aimed at highlighting the continued human rights violations taking place in
Bahrain.

The activists lawyer, Mr. Mohammed Aljishi had previously stated that the
hospital clinic can no longer administer IV fluids as the activists veins are
too weak.

Mr. Abdulhadi Alkhawaja’s daughter, Human Rights Defender Ms.Maryam
Alkhawaja, Head of Foreign Relations of the Bahrain Centre for Human
Rights(BCHR)as well as the Gulf Centre for Human Rights (GCHR) , had previously
stated that Mr.Alkhawaja was exhibiting symptoms of a person on his 60th day of
hungerstrike as his Kidney had already started to get affected. He also shows
signs of increasing fatigue and lack of concentration in addition to having
difficulty in moving.

The activist, even in accordance to the Bahrain Independent Commission of
Inquiry (BICI) that was commissioned by the King , was subject to severe
torture. Numerous international human rights organizations have called for
Mr.Abdulhadi Alkhawaja’s release such as Amnesty International, Human Rights
Watch, Human Rights First as well as Frontline Defenders and questioned the
trial procedures through which he was sentenced to life imprisonment.

The BYSHR once again calls for the immediate and unconditional release of
human rights defender Mr.Abdulhadi Alkhawaja and places full responsibility for
his well being on the Bahraini authorities.