Bahrain struggles to police the protests

Bahraini police were out in force on Tuesday to prevent large numbers of people marking the first anniversary of pro-democracy protests. The tactics employed against demonstrators have been heavily criticised, but commanders have promised reforms will safeguard human rights, reports the BBC's Bill Law.
On Tuesday, the authorities of Bahrain were successful in preventing protesters from getting anywhere near the site of the now-demolished Pearl Roundabout in the capital, Manama.
From that perspective, efforts by the opposition to march to the totemic roundabout and the monument that once stood in the centre of it - symbols of an uprising that has gone on for a year - were a failure.
The city centre was under a massive police presence and remained calm throughout the day.
The government had, it seemed, achieved a significant result without reports of serious injury to police or protesters.

Continue reading the main story But in Shia villages outside Manama another narrative was unfolding.
In communities like Sanabis and Sitra, riot police were battling young Shia angry that their communities were effectively locked down and they were blocked from trying to get to Pearl Roundabout.
Through that day and into the night police were subjected to stone throwing. They responded with tear gas and stun grenades. There were also reports of birdshot being fired. And the disturbances have continued through the week.
Opposition sources put the number of injured at more than 100. The police say two officers are in critical condition after being set alight by Molotov cocktails.

Policing is at the heart of what happens next in Bahrain.
The country's forces were the subject of a damning report by the Egyptian human rights expert, Cherif Bassiouni. It documented excessive use of force and the systematic torture of detainees. 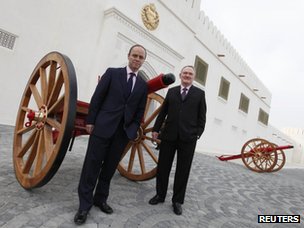 King Hamad Bin Isa al-Khalifa, who had commissioned the report in response to the international outcry over the crackdown, accepted its findings and promised to reform the police service.
Two foreign policemen were hired to oversee that process - the American John Timoney, a former head of police in Philadelphia and Miami, and John Yates, who resigned last year as an assistant commissioner for London's Metropolitan Police Service.
Mr Yates says that in the few weeks he has been in Bahrain, he has been impressed by what he has seen.
"The government has made excellent progress here," he adds, before noting: "Human rights training for 20,000 police officers is an immense undertaking."
That progress was not much in evidence in the Shia villages I visited.
I was taken to homes which had been hit by tear gas; spoke to young villagers who told me they had been arrested, beaten in police vehicles and then dumped back on the streets; and was told of unofficial torture centres where protesters were taken, abused and only afterwards officially arrested.

The anger of Shia toward the police is growing on a daily basis. And that anger is stoking protests which put the police themselves into an increasingly dangerous position. 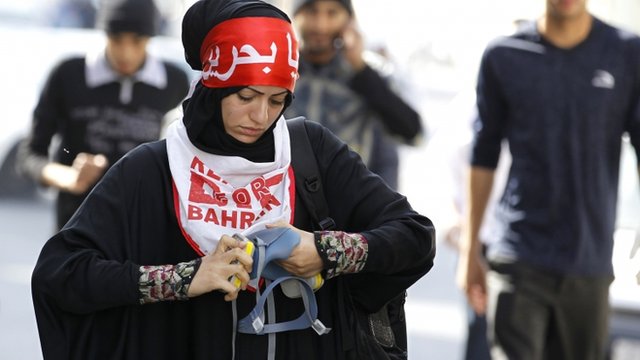 Advertisement
Bill Law reports for Newsnight on fresh clashes between police and protesters
I spent time with a police special-forces unit that came under sustained attack from protesters armed with Molotov cocktails in the Shia village of Karzakkan, and in our presence they showed commendable restraint. End Quote Maj-Gen Tariq Hassan Bahrain police chief

But on another night we were on the other side of the lines in Sitra, when police fired repeated rounds of tear gas at chanting protesters, most of them young women armed with nothing more than placards and flags.
The tear gas drifted into a flat we were using as a vantage point. Inside was a mother with four young children.
"The tear gas comes every night. We can't get away from it. What can we do?" she asked.
She was carrying an infant in her arms, his eyes streaming with tears.
International human rights organisations have condemned the way that police are using teargas in Shia villages, but the island's recently appointed police chief, Maj-Gen Tariq Hassan, insists his officers are using proportionate force.
"We use an escalation of power, an escalation of force. We have a systematic approach," he says.

On Thursday night, after I returned from Bahrain, I spoke to one of the leading activists via Skype.
With him was a young man who had, he said, been picked up, taken to an unknown place and tortured with a utility knife. He showed me the cuts, dozens of them, on his torso.
According to Gen Hassan, the police force has "zero tolerance for such incidents".
"We would never cover it up. We have nothing to hide."
He says there is a hotline that people could call and plans to create a police ombudsman are a top priority.
However, a Shia businessman, when told of those initiatives, says: "The police will do nothing with those complaints."
"If I go to a police station what do you think will happen to me? Maybe I will be beaten. Maybe I will be arrested."

It is that level of suspicion, and the apparent inability of the police to prevent human rights abuses, that is ratcheting up the tension in Bahrain.
Pro-democracy activists continue to insist that their protests are peaceful. It is the police, they say, who are responsible for most of the violence. 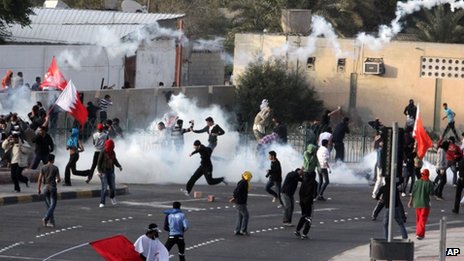 The opposition say that the violent crackdown on dissent is continuing
For their part the police say they are committed to the rule of law. Gen Hassan says the aim is "to rebuild bridges".
But there is no real sign of that happening.
The security forces are now using armoured personal carriers to try and contain protests.
"This is a war," one activist told me.
And as the two sides escalate their responses, the situation is dangerously close to slipping out of the control of both police and peaceful pro-democracy activists.
Pubblicato da Studi ME Africa a 10:46 PM