By Christine Mungai and Paul Redfern – The EastAfrican 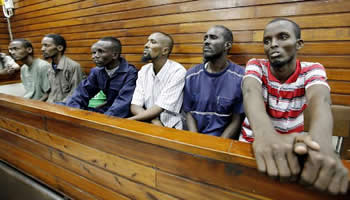 Feb27
When it comes to businesses, fortunes are always at the mercy of chance. This is the reality Raju Malde, a director at Pwani Oil, one of Kenya’s biggest oil and fats manufacturers, is grappling with. The profitability of his company is facing one of its worst threats with a surge in freight costs as shippers factor in charges arising from piracy on the Indian Ocean.
While Somali piracy has been around for some time now, the real cost of the menace is emerging with a new report that breaks down the total price of piracy to businesses — estimating it at Ksh50 million monthly for shippers. The world, business executives said, has been so preoccupied with how piracy got to its current levels that it has not noticed how much economic pandemonium the crime is causing countries.
“Freight costs have definitely gone up,” says Mr Malde. “The shipping lines are now charging a fee they are calling piracy risk surcharge, which is $10 on freight, and another $3 on insurance.” (READ: Freight forwarders turn to air cargo as shipping costs bite)
Mr Malde said that the bulk of their imports consist of palm oil from Indonesia, which they import by the tonne. “The piracy has had the impact of reducing our margins, and we are also passing the extra costs to the consumers.”
A new report by the One Earth Future Foundation, shows shipping companies are paying roughly $5,000 a day for a four-man armed team, on duty for four to 20 days to protect their vessels in the vital waters off the East African coast and through the Gulf of Aden.
The stretch — where more than a third of the world’s traded goods cross — is the most vulnerable to Somali pirates, meaning increased level of piracy pose a grave threat to international business.

Humanitarian agencies like the World Food Programme, too, have been affected. “Our ships have had to have military escorts from the EU and Nato,” says Challiss McDonough, WFP’s senior spokeswoman for East, Central and Southern Africa. “It’s not just the WFP, other humanitarian agencies have had to employ military escorts.”
Timothy Kimani, clearing and forwarding director of Siginon Freight Ltd, says that ships are reluctant to call at the port of Mombasa, and security is one of the major reasons why.
“The surcharges were not there before the piracy started. If you are a big importer bringing in about 6,000 containers every other month, you can see the impact,” he says. “The extra fees pay for security on board the ship, marine patrols and other efforts to prevent hijackings.”
A new report says that international shipping companies are paying more than $50 million a month for security on board their ships plying the coastal waters off the Somalia coast.
More than a third of the world’s traded goods cross the East African coast, the stretch of sea most vulnerable to Somali pirates. A sizeable percentage of cargo comprises oil from the Middle East, particularly Saudi Arabia and Iran.
According to the Security Association for the Maritime Industry, which represents 120 armed security outfits, more than half of which are British, many ships now employ private security companies as protection and this fledgling industry pulls in $52.2 million a month from an estimated 1,500 escorted journeys.
The vast majority of the estimated $7 billion spent last year in combating piracy was related to recurring costs associated with the protection of vessels — costs which must be repeated each year. This is in sharp contrast to the $38 million spent for prosecution, imprisonment, and building regional and Somali capacity to fight piracy. Average ransoms increased 25 per cent from approximately $4 million in 2010 to $5 million in 2011. Although the total cost for ransoms was $160 million for 2011, money collected by pirates represents a mere two per cent of the total economic cost.
“The human cost of piracy cannot be defined in economic terms,” said Anna Bowden, the report’s author. “We do note with great concern that there were a significant number of piracy-related deaths, hostages taken, and seafarers subject to traumatic armed attacks in 2011. This happened in spite of the success of armed guards and military action in the later part of the year.”
Continue reading on The EastAfrican
Pubblicato da Studi ME Africa a 3:07 PM