Twenty years ago this summer, Algeria's Hassiba Boulmerka ran to victory at the Barcelona Olympics. Her achievement wasn't just her country's first Olympic gold - she showed women everywhere how they could overcome prejudice to achieve their goals.
On the shelves of her spacious office near the capital, Algiers, are dozens of trophies that Hassiba Boulmerka won during her sporting days.
Above them hang photographs of her with sporting legends - the Ethiopian long-distance runner Haile Gebrselassie, the British athlete Jonathan Edwards - and world statesmen, including Nelson Mandela.
In Algeria, Boulmerka is hailed as the country's greatest athlete. She took the gold medal for the 1500m at the World Championships in 1991 and Olympic gold the following year.
But this was at a time when Islamist militancy was on the rise in Algeria, and some radicals thought the racetrack was not the right place for a woman.
She received death threats and in the run-up to the Barcelona Olympics it became too dangerous for her to train in her own country.
"That year I didn't run a single race [in Algeria]," she remembers. "It was simply too risky. I could have been killed at any moment."
Boulmerka's story begins in Constantine, a tumbledown city built by the Romans in the east of Algeria.
The fourth of seven children, she began running seriously at the age of 10, in 1978, and soon she was picking up medals at regional, national and international levels.
Her big breakthrough came in Tokyo in 1991, when the Constantine gazelle, as she had been dubbed, won the 1500m at the World Championships.
"Arriving back in Algiers, we were met by thousands of supporters," Boulmerka says.
She and fellow athlete Noureddine Morceli were driven through the capital in an open-topped car through streets thronged with well-wishers. "The atmosphere was electric," she says.

Fist of victory
But Algeria was changing. A botched election in 1992 saw the beginnings of a civil war in Algeria that was to claim more than 250,000 lives.
As government security forces battled Islamist militants, Boulmerka, too, became a target.
"I remember it well," she says. "It was Friday prayers at our local mosque, and the imam said that I was not a Muslim, because I had run in shorts, shown my arms and my legs. He said I was anti-Muslim."
Boulmerka and her family started to receive death threats, graffiti appeared denouncing her as a traitor and she was forced to move to Berlin to continue her training.
In the weeks before the Olympic Games, she severed all ties with her family in order to focus on the race.
In fact, she says, it wasn't that difficult to do: the militants had blown up the central telegraph office in Constantine, and all the telephone lines were cut.
Boulmerka arrived in Barcelona only on the eve of her races. She had taken a circuitous route via Oslo. The next day she was escorted to the stadium under armed guard.
"There were police everywhere," she says. "In the stadium, in the changing rooms - they even came with me to the bathroom!"
The 1500m final began at dusk on 8 August 1992. To start with, Boulmerka hung back in second place. But with half a lap to go she strode ahead of her rival, Lyudmila Rogacheva, easily beating the astonished Soviet athlete to the finishing line.
"As I crossed the line, I thrust a fist into the air," Boulmerka recalls. "It was a symbol of victory, of defiance. It was to say: 'I did it! I won! And now, if you kill me, it'll be too late. I've made history!'"
Standing on the podium later that evening to receive Algeria's first ever Olympic gold medal, she tried hard not to cry.
"I tried to hold myself together, to be brave," she says, "but the tears just started to fall. They were tears of sacrifice, for all the people I loved that I had abandoned for this race."
Making history
Her return from Barcelona was nothing like the victory tour she had received the previous year. The country was in the grip of war. She also learned that her father had suffered a stroke and slipped into a coma. 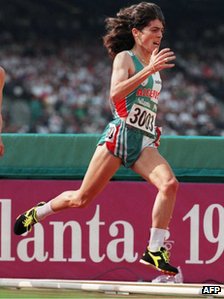 Boulmerka continued running, despite the danger
"My father worried a lot about me - it was an enormous stress for him," she says. "I knew that what I was doing was an incredible burden for him."
Boulmerka won a bronze medal at the World Championships in 1993, and gold again in 1995.
But she never repeated her Olympic victory. For a while she moved to Cuba to escape the threat to her life, but later she returned to Algeria.
"I never thought of leaving for good," she says. "Algeria is my life, my roots, my family, my friends. I could never give those things up."
But eventually she did give up running, and today she is a successful businesswoman. These days, there's little sign of the Constantine gazelle. "I like to eat well!" she says.
She spends a lot of time with her father, who made a slow but full recovery from his stroke.
But her sporting achievements will never be forgotten in Algeria. As she sees it, her victory in Barcelona wasn't just the first Olympic gold for her country.
"It was a triumph for women all over the world to stand up to their enemies," she says. "That's what made me really proud."
Pubblicato da Studi ME Africa a 12:27 AM