Iran has announced it will hold military exercises to boost protection of its nuclear sites.

A military statement said drills would be held in southern Iran to counter "all possible threats, especially to public, important and nuclear centres".
Speculation has been increasing that Israel may launch a military strike on Iran's nuclear facilities.
The latest move comes as UN nuclear experts begin a two-day visit to Iran, the second such trip in a month.
"The exercises aim to reinforce the integrated abilities of the country's anti-air defences," said a statement from the Katem-ol-Anbia military air base, quoted by the official Irna news agency.
It said the exercises would begin on Monday evening.
Late last year Iran conducted 10 days of military exercises near the Strait of Hormuz at the entrance to the Gulf, test-firing several missiles.
Iran has threatened to block the strait, through which 20% of the world's oil exports pass, in retaliation for Western sanctions over its controversial nuclear programme.
Iran insists it is enriching uranium to use for power generation, but the US and its allies believe the programme is geared towards making weapons, with Israel as a possible target. 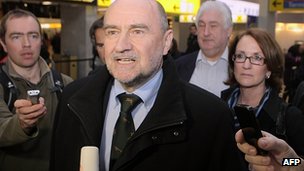 Meanwhile, the chief inspector with the UN's International Atomic Energy Agency (IAEA) said his team's "highest priority" while visiting Iran was to clarify the "possible military dimensions" of the nuclear programme.
"Importantly we hope for some concrete results from the trip," said Herman Nackaerts.
"This is of course a very complex issue that may take a while. But we hope it can be constructive".
The IAEA described its last visit, in January, as positive, and said Iran was "committed" to "resolving all outstanding issues".
The inspectors' evaluation of their visits may form part of the next written report on Iran's nuclear programme, expected later in February.
Last November the IAEA said it had information suggesting Iran had carried out tests "relevant to the development of a nuclear explosive device".
That information led to a decision by the US and the EU to tighten sanctions against Iran, including measures targeting the country's lucrative oil industry.
Iran said on Sunday it had halted oil sales to British and French companies ahead of an EU oil embargo set to begin on 1 July. Analysts say the gesture of retaliation is largely symbolic.
On Monday, the head of Iran's national oil company said the ban might be extended to other EU members that continued "hostile acts" against Iran.
Ahmad Qalehbani said exports to Spain, Greece, Italy, Portugal, Germany and the Netherlands could be stopped, semi-official Mehr news agency reported.
Pubblicato da Studi ME Africa a 10:14 PM