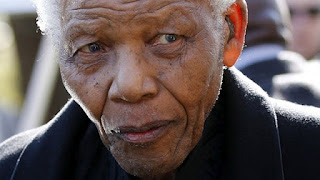 BBC's Andrew Harding: "Many people feel a very close connection with Nelson Mandela and they desperately want to know how he is doing"

President Nelson Mandela is in a stable condition after undergoing surgery, the BBC understands.Former South Africa
Officials said he was taken to hospital overnight for a "long-standing abdominal complaint" which needed "proper specialist medical attention".
A government spokesman said the former leader was "in good spirits and well".
The 93-year-old statesman and anti-apartheid icon has suffered declining health in recent years.
In a statement, President Jacob Zuma's office said the "love and good wishes of all South Africans and people throughout the world" were with Mr Mandela, and asked for his family to be given privacy.
The statement did not say which hospital he had been admitted to but there are suggestions it was a military hospital in the capital, Pretoria.
Mr Mandela had returned to Johannesburg last month from his rural home in the Eastern Cape and in January last year, he received treatment in the city's Milpark hospital for a serious chest infection.
"I can assure you that the former president is in good spirits and well," said Mac Maharaj, a spokesman for Mr Zuma.
He told the BBC that further information would be released once Mr Zuma and the Mandela family had received a full medical report from doctors, but that the 93-year-old's life was not in danger.
"This was a long-standing complaint - nothing that cropped up suddenly and needed emergency attention," said Mr Maharaj.
"But it is an issue that the doctors treating him felt needed specialist attention, and so arrangements were made accordingly."
He would not confirm reports that Mr Mandela had undergone overnight surgery for a hernia, and appealed for "co-operation from the public and the media so we manage this thing properly".

The BBC's Andrew Harding in Johannesburg says the government is clearly keen to control the flow of information, after previous alerts about the former leader's health have been the subject of much speculation.
Mr Mandela retired from public life eight years ago - his last public appearance was at the World Cup in South Africa in 2010.
The Nobel Peace Prize winner is affectionately known in South Africa as Madiba.
He spent 27 years in prison for his actions against the apartheid regime before being released in 1990.
In 1994, he became South Africa's first black president, stepping down in 1999 after one term.
Pubblicato da Studi ME Africa a 12:38 PM