Trains will be up and running in 3 years, says Saudi Railways chief 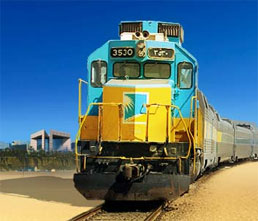 Custodian of the Two Holy Mosques King Abdullah has approved billions of riyals in recent years for the construction of multiple projects to link cities on the Kingdom's northern border with Jordan, such as Haditha, Qurrayat and Hazm Al-Jalamid with Buraidah, Majmaa and Riyadh in the center. The rail network will connect Dammam on the east coast with Jeddah on the west coast. High-speed trains will link Makkah with Jeddah, Rabigh and Madinah. Dammam will be connected to Jubail and Ras Al-Khair. These are mind-boggling projects. They will change the face of Saudi Arabia. They will likely stimulate a new industrial revolution in the Kingdom.

To understand these complex railway projects, Arab News turned to the sharp, alert and seasoned mind of 68-year-old Abdul Aziz M. Al-Hokail, president of the Saudi Railways OrganizationSaudi Railways Organization. He is at the center of these game-changing scenarios. A 1964 petroleum-engineering graduate from the University of Texas in the United States, Al-Hokail spent nearly four decades in Saudi Aramco where he carried out a number of projects, small and large. He was executive vice president when he finished his career with Saudi Aramco in August 2002. Obviously the experience of building oil terminals, refineries, pipelines and oil and gas separation plants has stood him in good stead while executing the mega railway projects.

This is Al-Hokail's fifth year at the SROSRO after successfully completing his first four-year term last year. Born in Majmaa near Riyadh, he went to a local school for his elementary education and attended high school in Riyadh.
Like all Aramcons, he is a stickler for time. We were to meet at 10 a.m. and we were ushered into his spartan office at the SROSRO headquarters in Dammam exactly on the dot. A tall and kind man, Al-Hokail takes great delight in explaining the immense projects in much detail and constantly points to a map of Saudi Arabia indicating which city is located where and how will it connect to other cities in other provinces.

"We currently have 1,200 km of rail lines, and when all these projects are completed in three or four years, we will have 7,000 km," he says. "I can't tell you the total costs of these projects, but it will spawn new industries, new cities, new employment opportunities, and there is every possibility that one will one day be able to take a train from Jeddah to cities in Europe."
Pubblicato da Studi ME Africa a 2:09 PM