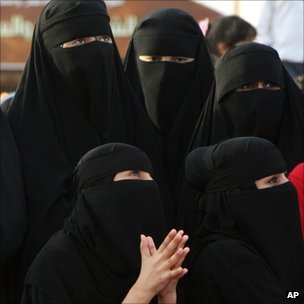 An investigation has been launched after at least 50 women were reportedly injured when a protest at a university in Saudi Arabia turned violent.
Hundreds of women took part in the protest against discrimination and mismanagement at the King Khalid University, in Abha, on Wednesday.
Dozens were said to have been injured after security forces and religious police moved in to break it up.
The university said some of the students had attacked staff.
The BBC's Arab Affairs Editor, Sebastian Usher, says that images of the women shouting in protest against the university authorities were posted on social media and networking websites.
The women are reported to have been injured either by the security personnel or in the crush of bodies.
There have been several protests at Saudi universities, or involving recent female Saudi graduates over the past year, mainly complaining about a system that is biased against them.
The kingdom has also moved to improve rights for women recently - allowing them the right to vote and participate in future municipal elections.
The students were angry about bad management, that rubbish was allowed to pile up at the university and at the lack of basic facilities for women.
Pubblicato da Studi ME Africa a 9:10 PM