The Bahraini airline Gulf Air says its official Facebook page has been hacked - for what it described as "political reasons".

The Gulf state's official carrier said it was working with law enforcement agencies to prosecute those involved.
According to social media, the airline's logo was replaced for a time by an image of an activist, Abdulhadi al-Khawaja, who is on hunger strike.
He was jailed for life for his part in last year's anti-government protests.
By Monday afternoon the airline's Facebook page appeared to have returned to normal, with an apology for any inconvenience caused.
Mr Khawaja has Danish citizenship but Denmark's request that he be transferred to its custody has been rejected.
On Friday, thousands of protesters in Bahrain took to the streets to demand his release.
He has been on hunger strike since early February in protest at his life sentence, and is said to be close to death. 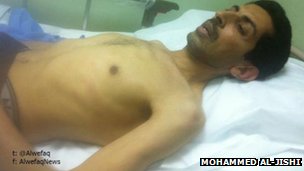 Mr Khawaja has told his family he will not stop his fast.

His daughter Zainab, who has been protesting over his plight, has been arrested twice in the last week.
On her Twitter page she wrote: "My Dad said he will not stop his hunger strike and told guards 'If I die, I die with dignity'."
Grand Prix questions
With less than two weeks to go until the Bahrain Grand Prix is scheduled to take place, Human Rights Watch has called on Formula One's organising body to think very carefully about staging the race in Bahrain.
A spokesman for Human Rights Watch, Joe Stork, stopped short of calling for a boycott of the Grand Prix. But he claimed that some racing teams are themselves questioning the wisdom of travelling to Bahrain as the situation deteriorates.
"On the ground we see an increasing number of deaths, and serious injuries from tear gas and beatings," he said.
"We're seeing in the last couple of weeks a spike in confrontations, and clashes, with very deadly results."
Bahrain's youth opposition movement, the February 14 Youth Coalition, has warned on its Facebook page that holding the Grand Prix in this "occupied country" will "provoke angry feelings of the Bahraini people."
Formula One's governing body, the International Automobile Federation, says it has been assured by the hosts that security will be guaranteed.
Last year's Bahrain Grand Prix was called off because of the demonstrations and crackdown.
Protesters from Bahrain's majority Shia population took to the streets during the Arab Spring demanding democratic reforms from the country's Sunni rulers; they were met with violence from the security forces and dozens died.
After months of violence, King Hamad commissioned an independent inquiry into events and promised to implement sweeping reforms.
But human rights activists say that the inquiry was not independent and the reforms have not taken place.
Pubblicato da Studi ME Africa a 8:12 PM