(Reuters) - The daughter of a prominent Bahraini opposition activist who has been on hunger strike for over two months was arrested on Saturday evening for trying to stage a protest in the capital Manama, activists said.
Sayed Yousif al-Muhafda said Zainab al-Khawaja, who has been arrested before only to be released several hours later, was taken by police after she tried to protest near the Financial Harbor in the capital.
She was among protesters who riot police tried to prevent marching inside the city's market area, a Reuters witness said. 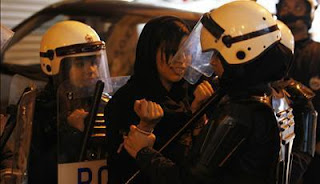