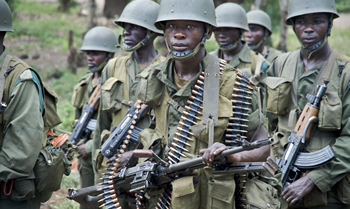 Rwanda faces fresh allegations that its soldiers are fighting in neighbouring Democratic Republic of Congo alongside the Bosco Ntaganda-led M23 Congolese rebels, who are currently causing mayhem in the Kivu region.
The international watchdog organisation Human Rights Watch claims that the Rwanda army has provided up to 300 fighters and offered weaponry to the rebels.
As the allegations fly, President Paul Kagame’s government is in a fix. Sources in the Rwanda military who spoke to Rwanda Today said Kigali will have to respond robustly to the allegations to retain its international credibility.
Simply issuing outraged denials is not enough. This is because Rwanda has a lot to lose, with its international credibility as a peace-builder now in question.
Its relations with the DRC — which have been improving in the recent past — are also at stake. Relations between the two nations have long been considered key to stabilising the shaky region, which harbours perhaps the largest population of militias in the world.

READ: DRC rebels target Congolese of Rwandese origin for recruitment
Analysts and government officials said while Kigali is putting a brave face on its ties with Kinshasa, its giant neighbour is currently generating Rwanda’s biggest political headache.
“The reality is that people are dying. Rwanda has no choice but to respond to the allegations,” said a source within the military.
“There is a feeling within the international community that Rwanda is an impediment to its access to the vast resources in DRC. So the allegations are aimed at clipping Rwanda’s wings.”
While government officials have over the past two weeks been on the defensive, rubbishing the claims, the worry is that the allegations are tainting Rwanda’s image abroad and could provide a fresh opportunity for the scattered elements of Democratic Forces for the Liberation of Rwanda to (FDLR) to regroup in Congo.

READ: US ‘concerned’ about M23, silent on Rwanda role
The FDLR — which is composed of remnants of the Interahamwe who carried out the 1994 genocide and the former Rwandan army of president Juvenal Habyarimana — had been weakened following two offensives by the Rwandan army and the Democratic Republic of Congo army three years ago.