Several were reportedly hurt as bird-shot and tear gas were fired to stop them reaching the village of Diraz.

Diraz, which is to the west of Manama, was also surrounded by checkpoints.

A 16-year-old boy also died on a nearby road. The authorities said he was run over by accident, but witnesses told the BBC he was being chased by police.
Call for non-violence
Long queues formed as people left their cars and attempted to reach Diraz Mosque to listen to Sheikh Qassem, the Gulf kingdom's most senior Shia cleric, deliver his sermon.
One witness said Budaiya Highway, a major road, was "packed with police manning double and triple checkpoints". 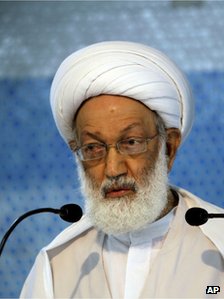 There were reports that teargas was used and that one man was seriously injured when struck in the head by a canister.

One source told the BBC that police also fired bird-shot and claimed that several people had been wounded.

The authorities have not commented on the unrest, but last month the interior ministry banned all public gatherings.

At the same time as the clashes, the 16-year-old boy was hit and killed while crossing a busy road near Diraz.

A statement on the interior ministry's Twitter account said: "The General Director of Traffic has announced the death of a Bahraini pedestrian, 16, in a traffic accident on Khalifa bin Salman road in Abuquwa."

Sources at the scene told the BBC that the boy, named as Ali Radhi, was being pursued by police as part of their effort to prevent people attending Friday prayers.

Al-Wifaq, Bahrain's main Shia opposition party, called the youth "a new martyr due to the brutality of the regime".

A posting on Twitter said he had been "run over by a civilian car while regime forces were besieging the area and arresting citizens heading to the prayers, chasing them and treating them brutally".

In his sermon, Sheikh Qassem spoke of the need for non-violence, stating that no-one should be targeted. But he urged the government to meet the demands of the people and urged his listeners not to bow to pressure.

The cleric also decried the decision by the government to revoke the citizenship of 31 Bahrainis for "undermining state security" earlier this week. Those affected include two former MPs for al-Wifaq.