Opposition groups say their demand for a boycott of Kuwait's parliamentary election has been a success and called the new chamber unconstitutional.
Election officials said the turnout was about 39%, compared to 60% in February polls.
The opposition had called for the boycott, saying new rules favoured pro-government candidates, who now dominate the 50-seat chamber.
The result also saw minority Shia MPs win their biggest tally, at 15.
Shia form 30% of the 1.2 million population and had seven candidates in February's assembly, which was later dissolved by the Constitutional Court.
Three women were also elected to the new parliament, the National Election Commission said.
'Lost legitimacy'
Islamists, liberals and Bedouins were among the main groups refusing to take part in Saturday's election.
The opposition boycott means 60% of the assembly are new MPs.
The biggest change is for Sunni Islamists. The boycott reduced their representation from 23 to four. 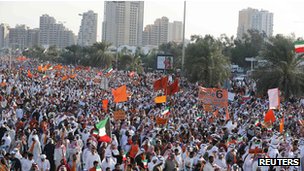 The opposition said the new assembly was "unconstitutional".
The Popular Committee for Boycotting the Election said the new body "does not represent the majority of Kuwaiti people and has lost popular and political legitimacy".
It said any legislation would be illegal.
Kuwait has seen months of confrontations between the opposition and government.
The crisis was sparked in June, when the Constitutional Court annulled the elections held in February, in which the Islamist-led opposition made significant gains.
The court also reinstated the previous assembly, allied to the ruling family.
After months of protests, Kuwait's emir, Sheikh Sabah al-Sabah, ordered the dissolution of that parliament and announced new elections.
His decree last month cut the number of candidates a voter could elect from four to one, saying it would ensure a fairer representation of people in the parliament.
But critics of the amendment said it gave the government greater influence over the outcome of the ballot.
Opposition MPs say the changes breaches the Gulf state's constitution. As a result they decided not to participate in the election.


Pubblicato da Studi ME Africa a 9:56 AM