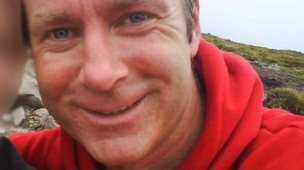 An Irish mountaineer and charity fundraiser has died while climbing Mount Kilimanjaro in Tanzania.

Ian McKeever, who was 42 and from Lough Dan in Wicklow, was leading a group of climbers when they were struck by lightning.
Mr McKeever was a leading member of the Kilimanjaro Achievers Team, a group of veteran climbers which led groups to the top of the mountain.
In 2007, the adventurer had scaled Mount Everest.
He is also the former holder of the record for completing the seven highest peaks in the world in the fastest time - 32 days fewer than the previous record.
In 2009, he was part of a team that attempted to row the South Atlantic Ocean in under 30 days, but the boat lost its rudder and they were forced to postpone the attempt.
More recently he had been attempting, along with African climbing guide friend Samuel Kinsonga, to break the record for the fastest ascent of Kilimanjaro, as part of their anti-racism Black and White Makes Sense Campaign.
Mr McKeever was the author of two books - Give Me Shelter and Give Me Heroes - and was working on a third book Give Me 28 Days.
On his Facebook page on Wednesday night, a statement said: "It is with deep regret, that we, Ian's family, fiancee Anna and friends, advise of his sudden death on Kilimanjaro, today, doing what he loved best."
Mr McKeever had been posting messages on the site during the ascent of the mountain.
His last post, on Tuesday, said: "Shira 2, 4,000m. Torrential rain all day. Spirits remain good even if drying clothes is proving impossible! We pray for dryer weather tomorrow - the big day. It's the Lava Tower."
It is understood none of the other climbers suffered serious injuries.
Pubblicato da Studi ME Africa a 1:44 PM