Iran has stepped up its military and financial aid to the Syrian government, departing US Secretary of State Hillary Clinton has warned.

Mrs Clinton, who steps down on Friday, said there were also signs that Russia continues to supply Syria with money and "equipment".
A spilling-over of the conflict into neighbouring countries was "within the realm of the possible now", she said.
Her comments came amid contradictory claims of an Israeli strike in Syria.
The Syrian army said Israeli war planes had bombed a military research centre north-west of Damascus, but the US and others said lorries carrying weapons bound for Lebanon were hit.
Israel has maintained silence about the incident, but Syria has made a formal complaint to UN, saying it reserves the right to defend itself. Meanwhile, Russia and Iran have strongly denounced the attack.
'Lethal civil war'
In her final press interview as US Secretary of State, Mrs Clinton said one of Iran's "highest priorities" was keeping Syrian President Bashar al-Assad in power.
"We believe they have acted on that by sending in more personnel, not only to help Assad, but to support and advise military security forces," she told reporters.
Mrs Clinton added that Iran had increased the quality of its arms sent to Syria because "Assad is using up his weaponry".
She expressed similar concerns with regards to Russia's involvement in the conflict.
"We have reason to believe that the Russians continue to supply financial and military assistance in the form of equipment," she said.
Mrs Clinton declined to comment on the alleged Israeli strike but voiced fears that the conflict could worsen or spread.
More than 60,000 people have been killed since the uprising against President Assad began 22 months ago, the UN said.
"I personally have been warning for quite some time of the dangers associated with an increasingly lethal civil war and a potential proxy war," she said.
"Therefore, I think it's incumbent on those nations that have refused to be constructive players to reconsider their positions because the worst kind of predictions of what could happen internally and spilling over the borders of Syria are certainly within the realm of the possible now."
Earlier, the Syria army said Israeli fighter jets had bombed a scientific research centre in Jamraya, near Damascus, killing two people and wounding five.
But a US official told the BBC the target had been a convoy carrying SA-17 surface-to-air missiles bound for the Shia militant movement Hezbollah in neighbouring Lebanon. 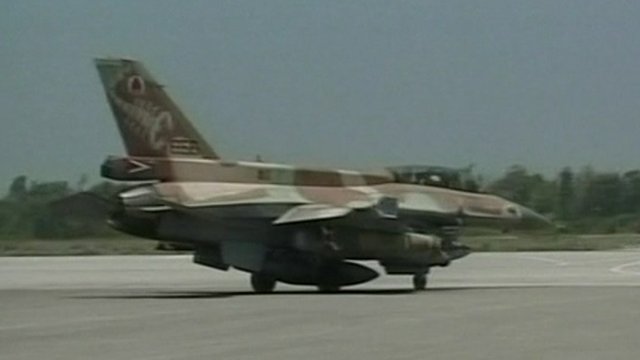 Advertisement
There are differing accounts about what the reportedly Israeli strike was targeting
Meanwhile, some rebel groups said they had targeted the Jamraya centre.
The White House did not confirm details of Israel's raid itself, but issued a warning to Syria.
"Syria should not further destabilise the region by transferring weaponry to Hezbollah," the White House's deputy national security adviser Ben Rhodes said.
There has been increasing concern in Israel that Syria's chemical weapons could fall into Hezbollah's hands.
Correspondents say Israel is also worried the Shia militant group could obtain anti-tank and anti-aircraft missiles, thus strengthening its ability to respond to Israeli air strikes.
Wednesday's reported attack came days after Israel moved its Iron Dome defence system to the north of the country.
Pubblicato da Studi ME Africa a 1:52 PM