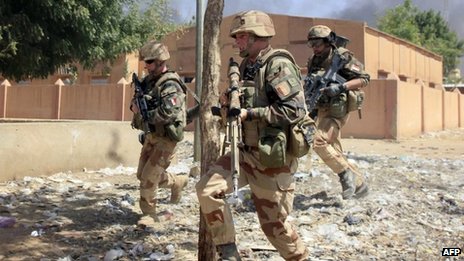 France intervened in Mali amid fears militants would take over Bamako

The US has deployed 100 troops to Niger to assist French forces in neighbouring Mali, the US president has said.

The US and Niger signed a status of forces agreement last month, and the US is weighing a base for surveillance drones there, US media have reported.

A senior Niger official said in January that US Ambassador Bisa Williams requested permission to establish a drone base in a meeting with Niger President Mahamadou Issoufou, the Reuters news agency reported.

Last month, the US and Niger struck an agreement on the status of US forces as the two nations "define precisely what kind of military presence we may have in Niger in the future", a spokeswoman for the US state department said.

The new deployment of US forces are stationed in Niger with the government's consent, Mr Obama said in his letter to Congress.

Their mission will focus on "intelligence sharing", the president said. They will be armed for their own protection, he said.

Thousands of troops from France and African nations have been sent to Mali to oust Islamist militants.

They have recaptured the major towns in northern Mali.
Pubblicato da Studi ME Africa a 10:42 PM