A court in Egypt has upheld 21 death sentences handed down to fans over deadly football riots in Port Said, amid continuing unrest.

Five of 52 other defendants were sentenced to life in prison for rioting while others received lesser sentences or were acquitted.
Locals accuse the Cairo court of leniency towards the police over the riots, in which 74 people died.
Rival protests are reported in both Port Said and the capital.
In Port Said, demonstrators tried to disrupt car ferry traffic across the Suez Canal while in Cairo, a police social club was set on fire.
Fans of the two rival football teams, Port Said's al-Masry and Cairo's al-Ahly, responded angrily to the verdicts for different reasons.
The army is patrolling Port Said instead of the police in an effort to ease tension.
Elsewhere, at least 10 of Egypt's 29 provinces were affected by an unprecedented strike by thousands of low-ranking police. Some units reportedly left their headquarters after sealing them with chains.
They were protesting against being forced by the government of Islamist President Mohammed Morsi to confront protesters as well as a lack of protection from prosecution.
The chief of security forces was replaced on Friday to try to defuse anger among police.
'Politicised'
Confirming the capital punishment sentences, Judge Sobhi Abdel-Maguid specified "the death penalty by hanging".
In addition 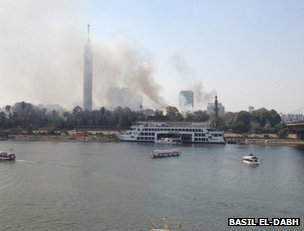 Smoke from the burning police club could be seen across Cairo
The court's verdicts, broadcast live on TV, were greeted with suspicion and anger in Port Said.
Some demonstrators tried to block the canal by untying speedboats and setting them adrift while others sought to interrupt car ferry traffic.
El-Sayed Hafez, a retired resident of the city, told the al-Ahram newspaper: "The verdict is politicised... only two of the police officers were convicted."
He accused President Mohammed Morsi of trying to placate fans of al-Ahly, who are known as the Ultras.
Most of the victims in last year's riots were supporters of the team.
Ultras initially cheered Saturday's verdicts but there was anger that they had not gone far enough.
As fans headed for a rally in their stadium, the main social club of the interior ministry was set on fire.
Tense week
The court sat in Cairo for security reasons.
After word spread that the defendants were being moved outside Port Said, the city saw six days of clashes between police and protesters around the security headquarters.
At least seven people - civilians and security officials - were killed.
The original death sentences imposed on the 21 defendants in January sparked a revolt in Port Said, where many residents saw the trial as unjust and politically biased.
There has been widespread antagonism towards the police since the mass protests which brought down former President Hosni Mubarak in February 2011.
Many people believe police in Port Said stood by in revenge for the fans' role in anti-Mubarak unrest. Police deny the accusation.
Pubblicato da Studi ME Africa a 12:38 PM