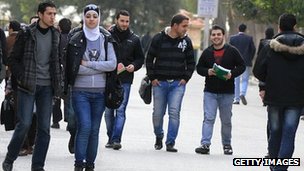 Mortar fire has hit the University of Damascus, killing at least 10 students, Syrian officials say.
Syrian state TV blamed rebels for the attack, saying a number of people had also been injured.
It said the mortars had hit the university's faculty of architecture.
The Syrian capital is in the grip of heavy fighting between government and rebel forces, who have recently intensified the use of mortars in the city.
The attack on the university was also reported by the Syrian Observatory for Human Rights (SOHR), a UK-based activist group, AFP news agency said. It said several rounds had hit but did not give further details.
At least five people have been killed by mortar fire in the centre of Damascus since Monday, AFP said.
Pubblicato da Studi ME Africa a 1:33 PM