How to be an investigative science journalist 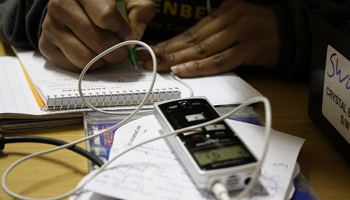 Apr2
Investigative journalism is rewarding but requires vigilance, determination and preparation. K. S. Jayaraman (former science correspondent for the Press Trust of India) shares tips from his career.
Every journalist should aim to do some investigative reporting during his or her career. Investigative stories make good copy, and can also bring awards and recognition. After all, it is a journalist’s duty to uncover the truth.
But is science fertile ground for such stories? While it is true that the politics and crime beats offer great opportunities, this guide will show you that like most areas of public life, science has just as much scope for investigation. Here you will find first-hand examples of how to go about investigating science.

Most science stories are second-hand, based on findings made by scientists. Investigative pieces, in contrast, rely on the reporter’s own initiative to ferret out news that other people conceal.
Spotting stories requires a critical eye, a quizzical mind and the determination to keep digging for information even in the face of stiff opposition. Sometimes the real story emerges while you are sniffing around for information on something else.
Ideas for stories can come from a variety of places. Listen to interviewees carefully: are there certain points they are defensive about? For example, I was once interviewing a WHO official who refused to give me further information about a mosquito research project in New Delhi, India, saying it was “sensitive” — a word that should ring alarm bells for any journalist. This led to a six-month investigation, a parliamentary inquiry and the government shutting down the project.
Similarly, when during a routine introductory meeting a senior official at the agriculture ministry mentioned his department had “recently destroyed a huge consignment of infected plants”, I pressed him further and he revealed that the plants were hops that had been infected by nematode worms. He then refused to discuss the topic, making me suspicious (more on this later).
It’s a good idea to read the news and academic literature in areas that might be fruitful for investigative stories, particularly within beats you want to cover. This makes it easier to find conflicting information.

When a private eye hospital in Chennai, India, claimed it had carried out a record number of corneal transplants — where a diseased cornea is replaced by donated corneal tissue — I was suspicious, having read stories about shortages at eye banks. Further investigation showed that the hospital was intercepting most of the eyes donated to India for poor patients by an eye bank in Sri Lanka, selling them to their rich patients instead. When the story was published it prompted the government to route donor eyes via government hospitals and build safeguards into India’s Eye Donation Act.
Journalists can play a role in rooting out scientific fraud, such as when Nature questioned the validity of stem cell research in South Korea. [1] But for most journalists, reporting on scientific fraud is more about looking into other people’s accusations. [2]
Lots of investigative stories start as tip-offs from sources. It is always useful to cultivate contacts with leaders of scientists’ unions or associations, or disgruntled elements in the establishment who may tell you when someone is hiding important information.
You can’t follow up every tip-off, so use your judgment about what’s worth pursuing. You’ll develop this over time, but also use common sense. Ask yourself some basic questions: does this seem likely? Does the source have something to gain from a story? Is this the kind of thing someone would want to hide? You’ll soon learn which ideas are worth looking into and which to avoid.

Once you’ve decided a story is worth chasing, do some preliminary research. At this stage you need information to show it’s a valid story when pitching it to your editor.
The information you gather depends on what you’re looking into. When I began to look into the WHO mosquito research project, it was before the days of the Internet, so I scoured the project’s own published reports and relevant books and journals, and spoke to sources. You must be patient: investigative stories can take days, weeks or months, and sometimes come to nothing.
For the infected hops story, I rang a contact I’d cultivated over many years, a plant pathologist at the Indian Agricultural Research Institute in New Delhi. He explained that nematodes are deadly agricultural pests and difficult to eradicate from the soil, and that the consignment of hop plants had originated in Australia and was infected with a type of nematode not recorded in India. This was enough to make me think it was worth investigating further.


Continue reading on SciDev.Net
By K.S. Jayaraman, a freelance science journalist based in Bangalore, India. He is former science correspondent for the Press Trust of India.
Pubblicato da Studi ME Africa a 2:34 PM