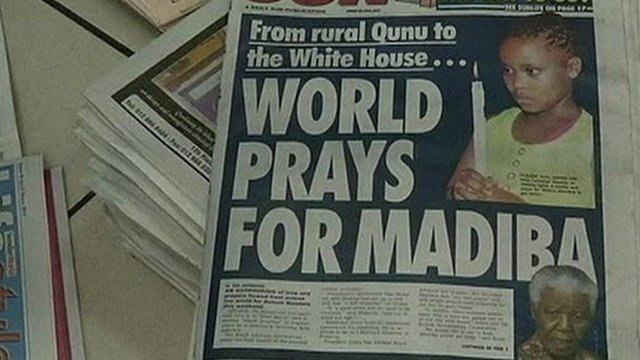 BBCNEWS
Doctors treating former President Nelson Mandela for pneumonia report "a further improvement in his condition", South Africa's presidency has said.
Its statement on Sunday evening, it said he "had a restful day" in hospital and continued to receive treatment.
Mr Mandela, 94, has spent four days in hospital and there are no details yet on much longer he will stay there.
Churches across the country have held prayers for Mr Mandela, who led the struggle against apartheid.
In the statement, released shortly before the former leader was due to spend a fifth night in hospital, President Jacob Zuma thanked "the thousands of South Africans who prayed for Madiba at various Easter church services".
Madiba is Mandela's clan name and is widely used to refer to him.
At the Regina Mundi church in Soweto - once a focal point of the anti-apartheid struggle - several hundred people gathered to pray for Mr Mandela.
Another service, at Midvaal - south of Johannesburg - was attended by a grand-daughter of the former leader, Ndileka Mandela.
On Saturday, Mr Zuma's office said Mr Mandela was breathing without difficulty and that excess fluid had been drained from his lungs.

Pleural effusion
The former president first contracted tuberculosis in the 1980s while detained on windswept Robben Island.
His lungs are said to have been damaged while working in a prison quarry. This latest spell in hospital is his fourth in just over two years.
Mr Mandela served as South Africa's first black president from 1994 to 1999 and is regarded by many as the father of the nation for leading the struggle against apartheid.
Presidential spokesman Mac Maharaj, a prisoner on Robben Island with Nelson Mandela in the 1960s and 70s, said on Saturday that Mr Mandela had been admitted to hospital "due to a recurrence of pneumonia".
In his statement he said: "Doctors advised that due to the lung infection, former President Mandela had developed a pleural effusion which was tapped. This has resulted in him now being able to breathe without difficulty.
The hospital Mr Mandela is attending has not been disclosed.
Last December Mr Mandela was treated for a lung infection and gallstones - his longest period in hospital since leaving prison in 1990.
In February, he was treated for a stomach condition.
When asked whether people should prepare for the inevitable, Mr Zuma told BBC News: "In Zulu, when someone passes away who is very old, people say he or she has gone home. I think those are some of the things we should be thinking about."
But he stressed that Mr Mandela had been able to handle the situation "very well" so far.
South Africans have been praying for the recovery of Mr Mandela, who remains a moral beacon in the country despite withdrawing from public life almost a decade ago, the BBC's Africa correspondent Andrew Harding reports.
Despite his long imprisonment, Mr Mandela forgave his former enemies and as president urged South Africans of all races to work together and seek reconciliation.
In 1993 he was awarded the Nobel Peace Prize.
His main home is in Qunu, a small rural village in Eastern Cape province, where he says he spent the happiest days of his childhood.
However, doctors said in December he should remain at his home in the Johannesburg neighbourhood of Houghton to be close to medical facilities.
Pubblicato da Studi ME Africa a 12:37 AM