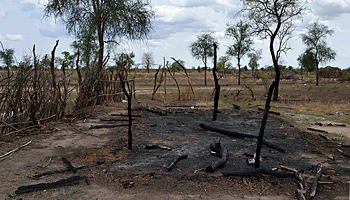 Apr4
The Small Arms Survey’s Human Security Baseline Assessment (HSBA) for Sudan and South Sudan project released a new paper which describes the first year of renewed war in South Kordofan (June 2011–July 2012), focusing on the conduct and dynamics of the conflict and the primary armed actors.
In early 2011, smouldering tensions between the Government of Sudan (GoS) and the Sudanese People’s Liberation Movement/Army (SPLM/A) flared up again in Sudan’s South Kordofan and Blue Nile, two states bordering what was soon to become independent South Sudan. Since the 1980s, these states had been main theatres in the civil war between the central government in Khartoum and the SPLA. That conflict ended with the 2005 Comprehensive Peace Agreement (CPA), which cleared the way for a referendum on self-determination in the South, but not in the two border states. By June 2011, large-scale conflict engulfed South Kordofan’s Nuba Mountains area, later spreading to Blue Nile in September.
Within just a few weeks, this ‘new war’ saw the mobilization of thousands of men and huge quantities of weapons and ammunition, air strikes, and the displacement of hundreds of thousands of people. The new conflict pits Sudanese forces—the national army and paramilitaries—against the northern branch of the SPLM, including former members of the southern SPLA, and allied elements of the Darfur armed opposition.
While the war in South Kordofan is fundamentally a conflict between primarily (Northern) Sudanese actors for control of the state, it has clear cross-border implications—as SAF’s air strikes in Unity state and the Southern fighters’ temporary seizure of the Hejlij oil fields attest. This paper reviews these border aspects of the conflict and its impacts on relations between Khartoum and Juba.
Key findings include:
• The rebels appear to have made significant gains in the first year with some 30,000 Sudan People’s Liberation Movement-North (SPLM-N) troops and allied forces capturing a large part of the Nuba Mountains area.
• The involvement of a relatively small contingent (700–1,000) of experienced Justice and Equality Movement (JEM) fighters was crucial to rebel victories.
• Prior to and just after Southern independence, the Sudan People’s Liberation Army (SPLA) sent thousands of ethnic Northern SPLA soldiers to South Kordofan fully armed with small arms, heavy weapons, and tanks, providing a significant source of fighters and weapons for the rebellion. In the post-independence period, however, the Small Arms Survey has found no evidence of weapons supplies from the Government of South Sudan (GoSS) to the SPLM-N, though some political and logistical support is evident.
• Rebel seizures of SAF weapons and vehicles between June 2011 and April 012 provided their most valuable military resources, allowing SPLM-N to preserve its strength and making it less reliant on military supplies from outside the country.

• Much of the rebel arms and ammunition obtained through capture from SAF were of older vintage, mainly Soviet-type small arms, light weapons, and their ammunition originating from Bulgaria, the Russian Federation, and Ukraine. Captured Sudanese and Chinese-made weapons and ammunition were more recently produced.
• SAF superiority in South Kordodan is limited to its control of the skies. As in its Darfur campaign, the use of adapted Antonov cargo planes and military aircraft for bombing has not led to military advances but has succeeded in terrorizing and displacing the local population.
• There is strong evidence that SAF has employed cluster bombs and incendiary weapons in South Kordofan. The presence of anti-personnel landmines in the stores captured from SAF, subsequently used by SPLM-N, was also documented, while reports on the the use of chemical weapons during SAF offensives remain unverified.
• SPLM-N and JEM fighters are present on both sides of, and regularly cross, the border between South Kordofan and South Sudan’s Unity state. They have been also operating in areas of South Kordofan claimed by the GoSS, notably around Jaw, Hejlij, and Kharasana. But the Northern rebels are not proxies of South Sudan, as Khartoum asserts. Despite the important links between them, the SPLM-N has a distinct political and military agenda from that of the SPLA.

• Solving the North-South conflict will not be sufficient to solve the South Kordofan problem. The conflict in South Kordofan is, in the first place, an internal Sudanese issue rather than a mere ramification of North-South tensions. Even if South Sudan further severs its links to the SPLM-N, the war, with an increasingly national agenda, will continue to threaten both national and regional stability—just as the conflict in Darfur has survived the Chad–Sudan rapprochement.
Read the full report
By Claudio Gramizzi and Jérôme Tubiana
Pubblicato da Studi ME Africa a 2:39 PM