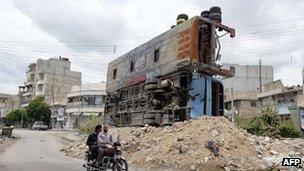 The Syrian conflict has made the country one of the most dangerous for journalists
BBCNEWS
An Italian journalist has been missing in Syria for 20 days, his newspaper La Stampa says.
Domenico Quirico, 62, an experienced war reporter, entered Syria from Lebanon on 6 April saying he would be out of touch for a week.

La Stampa says there was sporadic phone contact until 9 April since when nothing has been heard.
The conflict in Syria has made it one of the most dangerous places for journalists to work in.
According to the Committee to Protect Journalists, Syria was the most deadly country for reporters in 2012.
Four Italian journalists were seized in Syria earlier this month but freed soon afterwards.
Crisis unit
La Stampa's editor-in-chief, Mario Calabresi, said the Turin-based paper decided to publicise Mr Quirico's disappearance after a search for the correspondent failed to turn up any leads.
"We had hoped that keeping quiet would help bring about a solution," said Mr Calabresi.
"Unfortunately this has not been the case, and for that reason we have decided to make his disappearance public."
The Italian foreign ministry has activated its crisis unit to try to trace Mr Quirico.
The journalist, who has reported on conflicts in Sudan, Uganda and Libya, would often disappear for a few days at a time, said Mr Calabresi, but not for this length of time.
Pubblicato da Studi ME Africa a 12:51 AM