A Potted History of Failed States 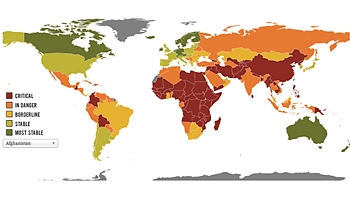 By Elliott Ross – Africa is a country

What version of the Third World in 2013 does Washington DC want to tell itself, and why?

In the same week that investigative reporter Jeremy Scahill spoke of the need for the USA to “take a humility pill” in order to become a properly functioning democracy with a government truly accountable to its people, we’ve been subjected to precisely the opposite — yet another “Failed States Index” from Foreign Policy Magazine, complete with accompanying “Postcards from Hell” purporting to show what it’s like “living on the edge in the world’s worst places.”
Quibbling with the many bizarre claims of the index is tempting (Kenya is “less stable” than Syria, we learn) but in the end such gripes only give credibility to this tedious yearly exercise in faux-empirical cultural bigotry. Last year Claire Leigh explained in the Guardian why the index belongs “in the policy dustbin”. As I pointed out in Foreign Policy around the same time, this is a failed index. For anyone interested in actually finding out about places like Yemen or Uganda, the Failed States Index is about the last place you’d want to go. But what’s more interesting, and more helpful in understanding what the index really does, is to grasp that the very concept of the “failed state” comes with its own story. This article is the potted history of the curious notion of the failed state.
The Failed States Index is many things, but accountability journalism, it ain’t. The organisation that produces the index, the Fund for Peace, is the kind of outfit John le Carré thinks we should all be having nightmares about. Its director J.J. Messner (who puts together the list) is a former lobbyist for the private military industry, their funding is not disclosed (though in 2006 they took donations from several Big Oil companies), and none of the raw data behind the index is made public. So why on earth would an organisation like this want to keep the idea of the failed state prominent in public discourse?
continue reading on Africa is a country
Pubblicato da Studi ME Africa a 12:01 AM