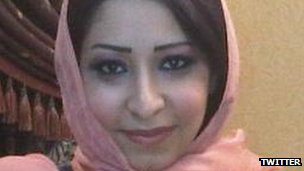 A Saudi Arabian activist and journalist has been banned from travelling abroad.
In a message on Twitter, Iman al-Qahtani said she had been stopped from flying to Istanbul. Only then, she said, was she told of her travel ban.
Ms Qahtani has been outspoken in her support for fellow human rights campaigners in the Arabian kingdom.
Saudi officials were said to have been unhappy with her reporting. In April, she said she would stop tweeting to protect her family from reprisals.
In a brief, dramatic tweet, she told her followers she was doing it for her mother's sake.
Live-tweeting trials
There were reports Ms Qahtani had been coming under pressure from the security services over her reporting of the trials of two leading Saudi human rights activists, Mohammad al-Qahtani and Abdullah al-Hamid.
The two men founded the Saudi Civil and Political Rights Association (ACPRA). They were tried on a variety of charges including breaking their allegiance to the king and setting up an unlicensed organisation.
Iman Qahtani was among a group of activists and journalists who live-tweeted the hearings, posting pictures from inside the court. This allowed a rare transparency for the legal process in Saudi Arabia.
One of the judges originally ordered Ms Qahtani's arrest for providing false information, although this charge was later dropped.
Both the ACPRA founders were finally found guilty and given sentences of 10-11 years in jail.
Several other rights activists have been imprisoned in the past two years - indication the Saudi authorities are taking a harder line on dissent in the wake of the Arab Spring upheavals.
Iman Qahtani's silence on Twitter had raised concerns for her.
Now, she has broken that silence - if only to show she is clearly being closely observed by the security services.
A travel ban is a common penalty in Saudi Arabia for those who are believed to be stirring political unrest.
On Twitter, there have been messages of support from Saudi tweeters for Iman Qahtani, as well as fears expressed that the government's campaign to silence critical voices is intensifying.
Pubblicato da Studi ME Africa a 1:26 PM