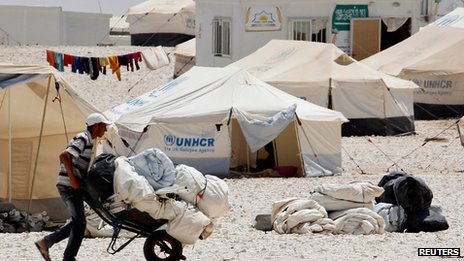 Some 1.8 million Syrians are seeking refuge in neighbouring countries - two-thirds of them have fled this year alone
Continue reading the main story

The conflict in Syria has caused the world's worst refugee crisis for 20 years, with an average of 6,000 people fleeing every day in 2013, the UN says.
UN refugee chief Antonio Guterres said refugee numbers had not risen "at such a frightening rate" since the 1994 genocide in Rwanda.
He was speaking to the UN Security Council, which also heard that 5,000 people are being killed each month.
UN aid chief Valerie Amos said at least 6.8 million Syrians needed urgent help.
Forces loyal to President Bashar al-Assad are locked in a fierce battle with opposition fighters for control of the country.
There has been deadlock at the UN Security Council over the crisis, with Russia and China refusing to back action against Mr Assad proposed by the other veto powers, the US, Britain and France.
'No empty warning'
Mr Guterres said two-thirds of the nearly 1.8 million refugees registered with the UN had fled Syria since the beginning of the year - an average of 6,000 a day.
"We have not seen a refugee outflow escalate at such a frightening rate since the Rwandan genocide almost 20 years ago," he told a rare public briefing to the Security Council.
Mr Guterres said the impact of the refugee crisis on neighbouring countries was "crushing", but said the acceptance of Syrians by countries such as Lebanon, Jordan and Iraq was "saving hundreds of thousands of lives".
And he said the "danger that the Syrian conflict could ignite the whole region" was "not an empty warning".
The UN last month said nearly 93,000 people had been killed since the uprising began in March 2011.
The UN's assistant secretary general for human rights, Ivan Simonovic, told the meeting that some 5,000 lives were being claimed each month, demonstrating "a drastic deterioration of the conflict".
"In Syria today, serious human rights abuses, war crimes and crimes against humanity are the rule," he said.
Ms Amos said $3.1bn was still needed to provide aid in and around Syria for the rest of the year, and she accused both sides in Syria of "systematically and in many cases deliberately" failing in their obligation to protect civilians.
"We are not only watching the destruction of a country but also of its people," she said.
Syria's ambassador to the UN, Bashar Ja'afari, said his government was doing "everything possible... to meet the humanitarian needs and basic needs of its citizens".
Pubblicato da Studi ME Africa a 11:58 PM