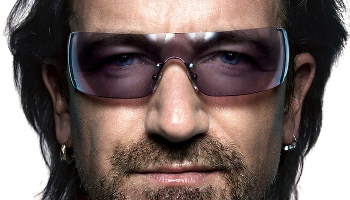 Sep28
Firstly Bono is collaborating with brostep pioneer Skrillex to save the African children. (They were together in Ghana last month.) Secondly The Observer (or The Guardian; it’s the same thing) has just published what might just be the most revealing and absurd interview with the world’s most self-righteous tax-dodging man who never removes his shades.
The article was titled “There is a difference between cosying up to power and being close to power,” something Bono apparently is an expert in. Of course the interview was conducted in some underground bar in Accra rather than in Bono’s land of origin, where he talked about his “25 years as an activist for African development” and the late Seamus Heaney.
For those whose hatred of Bono is as deep and visceral as mine or those who are merely looking for concrete reasons to despise on this particular celebrity do-gooder, be sure to check out Harry Browne’s devastating takedown The Frontman published by Verso as part of their Counterblast series — other targets put to the metaphorical sword in this series include such verbose and smug apostles of imperialism as Thomas Friedman, the late Christopher Hitchens and Bernard-Henri Lévy.
For those who avoid the high cult of tech utopianism, platitudes and technocracy known as TED talks: you might not know that Bono now describes himself as a “factivist” or in the words of the mildly sycophantic Tim Adams interviewer a “nerd who is aroused by the statistics of development” or in the words of Harry Browne, “Human beings have been campaigning against inequality and poverty for 3,000 years. But this journey is accelerating. Bono ‘embraces his inner nerd’ and shares inspiring data that shows the end of poverty is in sight… if we can harness the momentum.”
This data that so arouses Bono, according to Harry Browne, is mostly fantastical in nature.
Bono clearly takes great pride in his ability to get such diverse elites as the hawkish republican senator Lindsey Graham, former Bush jr cabinet member Condi Rice and the aforementioned EDM superstar Skrillex together in exotic locales like “this beyond-cool village bar” in Monrovia.
Bono also likes to boast about spending a lot of time with that famous humanitarian force known to the public as the US military — he has no qualms at all at courting these kind of interests and hanging out with such figures as General Jim Jones, Obama’s former National Security Advisor during Obama’s escalation of drone attacks on “militants” (anyone brown and male in the wrong place at the wrong time) in Pakistan.
continue reading on Africa is a country
By Benjamin Fogel – Africa is a country
Pubblicato da Studi ME Africa a 2:40 PM