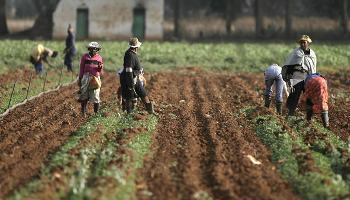 Sep10
This year marks the 100th anniversary of the Natives Land Act, which ratified and legalized the exclusion of  South Africa’s black majority from land ownership in favor of the white minority.
The result was “just 7% of agricultural land set aside for blacks, though they comprised nearly 70% of the population.” Following changes to the act in 1936, whites would own up to 87% of land by the end of Apartheid. Since the end of Apartheid, the government has been slow in effecting land reform, hampered by a range of factors, including threats from business, organized agriculture (basically white farmers), its controversial “willing buyer, willing seller” approach and a lack of political will. Ben Cousins is a professor at the University of Western Cape and founder of the Institute for Poverty, Land and Agrarian Studies. Since 1989, Cousins has researched land reform, communal areas and small holder agriculture. He has studied Swaziland’s land reform from 1976-1983, Zimbabwe from 1983-1991 and South Africa from the early 1990s. In June, Cousins won the Elinor Ostrom Award for his commitment to the analysis, creation and defence of common pool resources.
How would you describe the legacy of the 1913 Land Act?
Well, Henry Bernstein, a professor at the School of Oriental and African studies in the University of London, describes the South African agrarian question as extreme and exceptional.
The division of ownership on the basis of race was extreme. There was a large amount of black people squeezed into small areas of land, and small numbers of white people with large areas of land. It’s a very extreme form of land redistribution in general, but on productive land in particular.
The fact that this racial distribution came with class divisions, between capital on the one hand, and cheap labour on the other, means that confusion has risen about what extent this is racial dispossession and oppression, or class dispossession and oppression. They were both combined, in complicated ways, and all underpinned by gender inequality. In the earlier twentieth century, people were put into reserves in large numbers, and prevented from accumulating as farmers. Any kind of smallholder or peasant farm was eliminated by state policy, because these people were intended to be labour for the mines, factories, and commercial farms. So, the land question is combined with the labour question.
And along also came the native question, the governance dimension. In areas designated for black people, a particular kind of governance regime was installed. This was essentially a direct rule, a rule through the chiefs, a system that the British implemented in many other parts: complying chiefs helped the colonial government rule. The chiefs became accountable to government. So the whole question of chiefs, land tenure and who has authority to govern that land is another legacy of the Land Act.
continue reading on Africa is a country
By Camila Osorio Avendano – Africa is a country
Pubblicato da Studi ME Africa a 11:49 AM