The Maputo Protocol: Its potential for a revolution in women’s rights 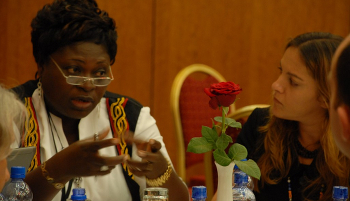 Sep29
“The speed with which the Protocol came into force on 25 November 2005 sets a new record for the ratification of pan African rights standards for the continent.
A key lesson is that the challenges of working with countries across the continent can be overcome by collaboration between governments, the AU Commission and national and regional women’s associations.” H.E. Alpha Konare, Founding Chairperson of the AU Commission (2000-2008), 2006, Addis Ababa, Ethiopia.
Gender plays a significant part in defining and determining the access that women have and the role that they play in governance, economic development, and in society as a whole. Traditional gender roles have confined women to the private sphere. Lobbying from women’s rights activists andmounting evidence of the correlation between gender equality and positive economic development and democratic reform has led to efforts at global, continental, regional and national levels to mainstream gender equality; the Protocol to the African Charter on Human and Peoples’ Rights on the Rights of Women in Africa (the African Women’s Protocol) is a manifestation of these efforts.
Grounded in the belief that instruments, protocols, laws and policies are powerless to change the lives of African women in the absence of an organised public demand for their implementation and enforcement; Oxfam’s Pan Africa Programme through its Gender Justice Pillar works with partners including the Solidarity for African Women’s Rights Coalition to build and mobilize a critical mass of active citizens to advocate for effective for realisation of women’s rights contained in the African Women’s Protocol. Oxfam Pan Africa Programme also supports accelerated ratification, domestication and implementation of the African Women’s Protocol through the State of Union a coalition of civil society organisations that tracks the compliance of AU State Parties on 14 key policies and frameworks adopted by the African Union one of which is the African Women’s Protocol.
Adopted by the African Union in July 2003, the African Women’s Protocol is revolutionary legal instrument on Women’s Rights and is the first international instrument to speak to specifically to the rights of women in the African context. Countries that ratify the Protocol agree not only to eliminate all forms of discrimination against women but to end all forms of violence against women, abolish harmful cultural practices that affect women including child marriage, female genital mutilation, to protect women’s reproductive health rights, including the right to abortion in cases of rape, incest or to protect the life of the mother. The Protocol also binds State Parties to the provision of political and economic rights on an equal footing with men, obligating State Parties to ensure equal participation of women at all levels of decision making, maintenance of peace and security, and provide for affirmative action.