Two European men have been burnt to death in Madagascar by protesters who suspected they trafficked the organs of a missing child for witchcraft rituals.
Witnesses say a local man suspected of involvement was also lynched hours later on Nosy Be, a tourist island resort in Madagascar's north-west.
It is believed he may be the person questioned by police over the child's disappearance on Wednesday.
His detention prompted riots outside a police station and the ensuing unrest.
"Rioters launched a manhunt and killed the Europeans" in the early hours of Thursday morning, the deputy commander of the paramilitary police, Gen Guy Randriamaro Bobin, told the AFP news agency.
He said an eight-year-old boy's lifeless body was found on Thursday morning, without genitals and without a tongue, the agency reports.

Richard Hamilton BBC News, former correspondent in Madagascar
The idyllic island resort of Nosy Be has been a magnet for tourists from all over the world. But it has a darker side too. There have long been suggestions that there is a thriving sex tourism industry and there have also been reports of paedophilia.
The vast disparity in wealth between rich tourists and an impoverished local population means there is plenty of opportunity for exploitation. When you add all this together you have the possibility of deep-seated resentment.
Belief in the supernatural in Madagascar also runs deep. Anthropologists believe that accusations of witchcraft often surface when there is friction and jealousy between the haves and the have-nots.
To make matters worse, Madagascar has become increasingly lawless amid a political vacuum since the overthrow of the previous president. With elections coming up there are suspicions that some politicians are exploiting these tense times and incidents like this to stir up hatred.

Officials initially said the men were French nationals, but residents on Nosy Be say one of the men may have been Italian.
"Two foreigners died, we have confirmed that one of them was French," AFP quotes France's foreign affairs spokesman Philippe Lalliot as saying.
Several hours later witnesses, including an AFP correspondent, saw a man dragged from a vehicle and thrown on a fire on the popular palm-fringed Ambatoloaka beach.
A Nosy Be resident told the BBC the man was the suspect questioned by the paramilitary police on Wednesday, who was later released.
The BBC's Tim Healy in the capital, Antananarivo, says Nosy Be is the jewel in the crown of Madagascar's tourist industry and has been used to encourage tourists to return to the Indian Ocean nation following several years of political unrest.
Text alerts
According to reports, at least one person was also killed in the violence that erupted outside the police station in HellVille, the main town on Nosy Be, on Wednesday.
Police fired shots in the air to disperse the protesters, who had been hurling stones.
The mob then burnt down houses around the station before going on to find the home of the two foreigners.
"They confessed under torture [by the mob] to organ trafficking," Gen Randriamaro Bobin told AFP. 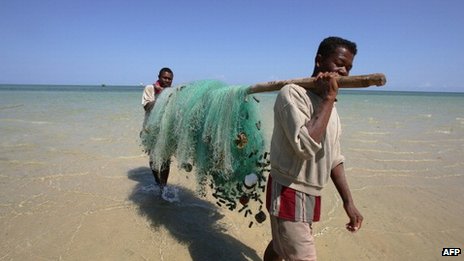 Tourism has been affected by Madagascar's political crisis and most islanders live on less than $2 a day
Local media reported that the protesters had found human organs in a fridge in the building where the Europeans were staying.
Our correspondent says the incident may have political undertones as elections are scheduled to take place on 25 October and there are tensions nationwide.
Poor communities fear that human organs can be removed for use in traditional witchcraft or cults, our reporter says.
Instances of mob justice are common in Madagascar and can be exploited to stir up political tension or as means of revenge over other disputes, he adds.
The French embassy in Madagascar sent out text alerts warning French nationals not to travel to Nosy Be and urging foreigners on the island resort to remain indoors and not go to the beach where it is reported the foreigners were burnt.
A regional government official on Nosy Be blamed for the paramilitary police's lax response to the case was reportedly kidnapped on Wednesday.