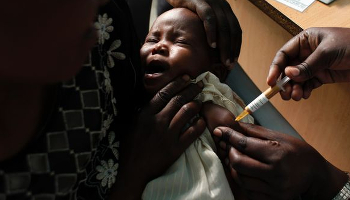 Oct12
Durban – Results from a phase III clinical trial indicate that a malaria vaccine candidate reduces by half infections of malaria among children tested in Africa after an 18-month follow-up, signifying a major development in the fight against the killer disease.
Researchers say the most clinically advanced malaria vaccine, RTS,S, created in 1987 by scientists working for GlaxoSmithKline (GSK), could be ready for use by 2015. GSK teamed up with the PATH Malaria Vaccine Initiative to develop the vaccine through funding from the Bill & Melinda Gates Foundation.
The efficacy of the vaccine is being tested among more than 15,000 young children and infants in seven countries in Sub-Saharan Africa: Burkina Faso, Gabon, Ghana, Kenya, Malawi, Mozambique and Tanzania.
The results were presented at the 6th Multilateral Initiative on Malaria Pan-African conference in Durban, South Africa, this week (8 October).
David Kaslow, the vice-president of product development at PATH tellsSciDev.Net that the researchers have learnt that the efficacy persists through 18 months in young children and infants.
RTS,S could protect children and infants against malaria for 18 months after vaccination, resulting in 46 per cent reduction of cases in children aged 5 to 17 months at first vaccination. For infants aged 6-12 weeks old at first vaccination, it reduced malaria infections by 27 per cent.
The results were achieved in an environment where other malaria control measures such as insecticide-treated bed nets were used by 78 per cent of children and 86 per cent of infants in the trial.
Daniel Ansong, a paediatrician and a senior lecturer at Kwame Nkrumah University of Science and Technology in Ghana, says GSK will submit the regulatory file from the phase III trial to the European Medicines Agency (EMA) in 2014.
“If EMA provides a positive scientific opinion, it would pave the way for national regulatory authorities in Africa to license the vaccine” says Ansong, who is also the principal investigator for the RTS,S trial in Agogo, Ghana, tells SciDev.Net.
The same regulatory file will be submitted to the WHO, which has indicated its intent to issue a policy recommendation as early as 2015, Ansong adds.
Kaslow says the vaccine shows a potential substantial public health impact, but the decisions about whether to approve, use or fund the vaccine depend on having all the results from the pivotal phase III efficacy trial.
While its developers believe the vaccine could help avoid many of the nearly 660,000 malaria-related deaths a year, most of which occur in Sub-Saharan Africa, vaccines alone will not control malaria, according to Charles Mbogo, president of the Pan-African Mosquito Control Association, based in Kenya.
“Major achievements in the fight against malaria have been mainly through mosquito control,” says Mbogo. “Additional weapons such as an effective malaria vaccine should be applied to complement the fight against the disease.”
By Munyaradzi Makoni – SciDev Net
Pubblicato da Studi ME Africa a 12:43 PM