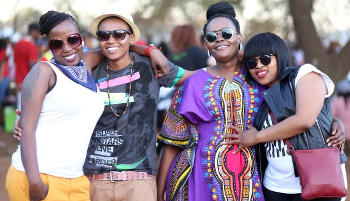 Oct28
Today, Johannesburg will host its annual Pride event with a march and other festivities. The 2013 event, titled, “c,” was rescheduled in September and moved to the well-heeled Sandton district of the city.
Yet both the new title and venue will likely not eliminate last year’s controversies. The 2012 Pride angered and disappointed many when the organizers violently turned away black activists who called for a one minute silence in honor of those black lesbian-identified women whose sexual orientation and gender identity had put their safety and their very lives at risk. (See last year’s coverage here.) Sexual violence targeting lesbian, black women has been a constant specter in South African society, although the frequently used term “corrective rape” remains contested, as activist Sekoetlane Phamodi has pointed out earlier this year. More than a decade after black lesbian activists founded the Forum for Empowerment of Women (FEW) to claim the rights of equal protection under South Africa’s constitution, targeted sexual violence still challenges these claims. The attempt on the part of activists with the One in Nine campaign to bring these issues to the fore of the 2012 Pride, and the resultant violent and disappointing response, underlines the daily challenges of life at the intersections of queerness, blackness, and township life.
To demand visibility and claim a queer identity in an environment structured by violent homo- and lesbophobia (Muholi’s term) as well as long-existant racial inequities is a tremendous challenge in South Africa. The original Pride celebrations in Johannesburg in the early 1990s were in this way a bold claiming of public space by people marginalized by their orientation (and just as often by their race, gender, and class identities as well). It is in this vein that a response to 2012 Pride, the Soweto Pride March attempted to “reclaim our space within Pride” through marching and celebrating not just sexual orientation but also the many other intersectional struggles and victories of black lesbians. Visual activists Zanele Muholi & Zandile Makhubu of Inkanyiso Queer Media created a fantastic series of photos documenting Soweto Pride. The many different figures in Muholi and Makhubu’s artwork capture a wide range of queer, black identities in celebration in Soweto.
These photographs are another part of Muholi’s larger work on documenting black lesbian life in South Africa. Her photographs of queer South African women have received numerous mentions in international news media, particularly for their varied (and often vulnerable) depictions of her subjects. Muholi and Makhubu’s work on the Soweto Pride shows a wide array of Pride celebrators in various outfits, poses, and moments of celebration. A celebration of solidarity and love in the midst of difference appear to be a common theme within the pieces.
Indeed, the images suggest much in common with the claims of a populist organizing group, the newly-formed Johannesburg People’s Pride, developed primarily in response to the results of the 2012 Johannesburg Pride. In their manifesto, People’s Pride called for a pride celebration that exists both as “a Political movement for social justice and social change” and that operates as “a microcosm of the society we wish to live in, and not a mirror of the divided one that we currently live in. We wish Pride to be a space that all can access, where all can be free, andwhere every voice is important.” Johannesburg People’s Pride celebrated as part of the larger Soweto Pride, and then held its own, pointedly political march on Constitution Hill on October 5.
By Maria Hengeveld and TJ Tallie – Africa is a country
Pubblicato da Studi ME Africa a 9:20 PM