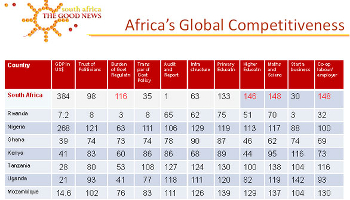 Oct1
It’s official, South Africa has now been overtaken by Mauritius in the Global Competitiveness report. Mauritius is now ranked 45th up from 54th last year. We are ranked 53rd, down from 52nd last year.
Mauritius is positioning itself as the Hong Kong of Africa. Rwanda is positioning itself as the Singapore of Africa. Nigeria is positioning itself as the investment destination of choice, maybe the China of Africa. And Ghana is working hard at improving its attractiveness.
Recently RMB produced an “Investment Attractiveness Report”. Of the top 40 countries in the world the US and China topped the list with SA at 33rd and Nigeria at 38th.
RMB also produced a supplementary ranking considering the effect of regional affiliation on a countries’ economic attractiveness. In this regard Mauritius ranked # 1 in view of its connectedness with COMESA (Common Market for Eastern and Southern Africa), Rwanda # 2 in view of its connectedness with SADC (Southern African Development Community) with SA ranked at # 3.
It would seem that the world’s love affair with us is in danger of cooling somewhat, but the good news is we can easily do better. One way to make a certain difference is to produce the right skills in the right focus areas.
I thought I would do some research on SA’s competitiveness in Africa, what better place to start than the recent Global Competitiveness Report 2013/2014 issued in September by the World Economic Forum ?
I wanted to establish:
1. Which are the largest consumer markets in Africa?
2. Which African countries are making the greatest strides in improving their competitiveness?
3. How well does SA do against our closest African competitors in the key competitive measures of:
4. Our most important geographical competitors are Nigeria, Rwanda, and Ghana which have a growing number of competitiveness measures in the top 50 (Rwanda in the top 25). How does SA’s competitiveness compare?
I will answer these below, one at a time. There are a number of tables which you will probably find revealing and surprising.
continue reading on South Africa the good news
By Steuart Pennington – South Africa the good news
Pubblicato da Studi ME Africa a 12:44 PM