Eritrea: a people under siege 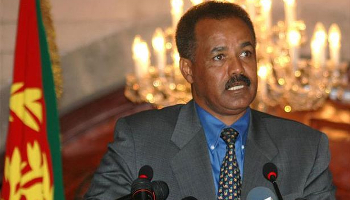 Nov15
Eritrea has no oil, gas or strategic minerals. It has no nuclear weapons or remnants of a settler-colonial population. Yet it is one of world’s most repressive regimes whose brutality is highlighted by fleeing refugees losing their lives in the waters off Europe’s southern coast.
The African Union declared 3rd November as a continental mourning day to be commemorated by all its member states for the hundreds of African refugees who perished off the Italian Island of Lampedusa on the 3rd of October. The AU decision is to be welcomed and is in accordance with the African tradition and custom to respect the dead and their spirit. However, it remains to be seen whether the AU will go another step beyond remembering the dead to prevent the lives of thousands of Africans by addressing the root cause of the tragedies. In fact, since the 3rd of October there were already reports of another capsized boat carrying more than 200 refugees, of which the majority were Eritreans. At least 50 people were reported drowned of which were many children whose bodies were seen floating in the Mediterranean Sea. The government of Malta, responding to the growing crisis and deaths, described the Mediterranean as becoming a ‘mass grave’.According to the official report of the Italian Interior Ministry the average age of all those who died or survived was 25 years. The overwhelming majority of them were Eritreans.
The question that many outsiders are not asking is: Why do Eritreans, especially the youth, leave their country in droves? What do they have to flee from in order to go through such dangerous and risky routes in their search for safety?
THE GREAT BETRAYAL TO PEOPLE’S ASPIRATIONS
After a protracted thirty-year war of liberation, Eritrea became independent from Ethiopia in May 1991, as a de facto state, which was formalized by a popular referendum held under the auspices of the United Nations in May 1993 when the people of Eritrea overwhelmingly voted for the independence of Eritrea from Ethiopia. Those outsiders who happened to be in Eritrea or speaking to an Eritrean in any part of the world, they cannot help but get infected by the confidence and the sense of optimism of the future that Eritreans oozed. Indeed, the optimism was not unfounded and neither was the triumph that resulted from the military success over the mighty Ethiopian army. The New York Times issued an article titled ‘Eritrea: African Success Story Being Written’ on 30 April 1996. In that article it was stated that ‘Five years after winning the war that led to independence, former Eritrean rebels are rebuilding their shattered country with the same tenacity and self-sacrifice that served them well in the longest civil war in recent African history.’
The Eritrean liberation struggle was waged for two main objectives. One objective was the attainment of national independence; another was social transformation. These two objectives were highly integrated and constituted the pillars of the strategy of the Eritrean Peoples’ Liberation Front (EPLF). In fact, one of the slogans of the EPLF was liberating land and people piece by piece with total reliance on the country’s own resources. In accordance to this strategy the EPLF had incrementally built not only a formidable and highly disciplined military force that stood against successive military operations of the Ethiopian army and eventually defeated the latter, but also created a network of mass organizations and administrative structures based on popular participation and mobilization of the people of Eritrea. It was indeed the total support of the Eritrean people that sustained the globally isolated Eritrean revolution for such a long time. The participation of women in all aspects of the revolution was remarkable and was expected to form the basis for the creation of a gender equal society.