Sectarian tension between Shia and Sunni Muslims is probably the most serious threat to the world security, according Iran's foreign minister.
Speaking to the BBC, Mohamed Javad Zarif blamed some Sunni countries for what he called "fear-mongering".
"Some people have fanned the animosity for short-sighted political interests," he said.
Syria, Iraq and Pakistan are among the countries currently grappling with a surge in sectarian violence.
Mr Zarif said conflict between Sunnis and Shias was "the most serious security threat not only to the region but to the world at large".
"I think we need to come to understand that a sectarian divide in the Islamic world is a threat to all of us."
'Fanning the flames'
Sectarian tension between Shia and Sunni Muslims has been a fact of life for more than 1,000 years, says the BBC's Middle East Editor Jeremy Bowen.
But upheaval in the Middle East this century, especially since the US-led invasion of Iraq in 2003, has made it much worse.
Around 6,500 civilians have been killed in sectarian attacks in Iraq so far this year - a death toll not seen since 2008.
Meanwhile, the Syrian war did not start as a sectarian conflict but it has become one, our correspondent says.
President Bashar al-Assad, who is from a heterodox Shia sect, is an ally of Shia Iran. Syria's majority Sunni community has been at the forefront of the revolt against the state, and the opposition is backed by Sunni powers, including Turkey and Saudi Arabia. 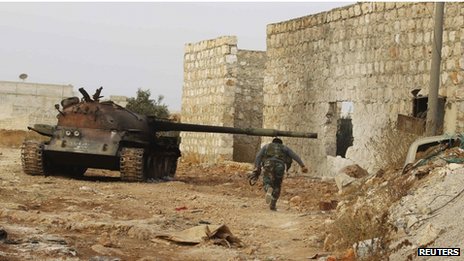 The conflict in Syria has increased tensions between Shias and Sunnis
Mr Zarif said all sides should forget their differences over Syria to oppose sectarianism.
"I think all of us... regardless of our differences on Syria, we need to work together on the sectarian issue," he said.
Without naming countries directly, he accused Sunni Arab leaders of "fanning the flames" of sectarian violence.
"This business of fear-mongering has been a prevalent business," he said.
"Nobody should try to fan the flames of sectarian violence. We should reign it in, bring it to a close, try to avoid a conflict that would be detrimental to everybody's security."
However Saudi Arabia, among other countries, accuse Iran of stirring up sectarian tension, our correspondent says.
Both sides recognise the dangers of what happening, he adds - but neither has come up with a way of stopping a deadly slide towards more religious conflict.
Pubblicato da Studi ME Africa a 9:52 AM