The Forgotten Factor in the Fall and Fall of Somali Piracy 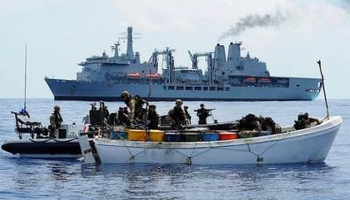 Nov20
In May 2012, a group of pirates hijacked the MT Smyrni, a Greek-owned oil tanker, off the northern coast of Somalia. By this time, the story of Somali militants boarding commercial vessels and holding ship and crew ransom had become a familiar to observers around the world, but at the same time, the dramatic decline in such events had already begun.
According figures from the International Maritime Bureau, there were 237 piracy-related events in 2011, the ‘glory days’ of Somali piracy; in 2012, this dropped rapidly to 75; and this year, as of 22 October, there have been just 11 incidents. The MT Smyrni was eventually released after a ransom was paid in March 2013, and it remains the last large-scale commercial ship to have been seized by Somali pirates. Although two vessels have been hijacked this year, they were much smaller fishing boats.
This drop in pirate activity off the coast of Somalia can be explained in part by the presence of onboard private armed security – which has shifted from being a niche market to a multi-million dollar norm – and the changed tactics adopted by international naval forces – from blanket maritime patrols to more intelligence-led activities. These are important factors and are often pointed to in explanations of Somali piracy’s demise.
However, there is also a third issue that usually goes under-examined, one that is no doubt harder to quantify and less immediately obvious, but one that is arguably more important than improved maritime security – namely, the changing onshore situation and the quietly rising prospects of Somali oil.

One of the main bases for pirates to launch operations used to be from the coast of the autonomous region of Puntland in northern Somalia. In 2009 alone, some $70 million of ransom payments entered the local Puntland economy due to piracy, according to research by Chatham House. Wages also rose in Puntland’s main piracy areas, and towns such as Garowe almost doubled in size between 2002 and 2009. Meanwhile during this time dozens of hijacked vessels were held close to the main pirate ports of Eyl and Hobyo.
However, under Puntland piracy’s business model, funds largely disappeared into the pockets of individuals. And when there was a return of interest in Somalia’s oil prospects, the previous high-level backers of piracy recognised a potentially new source of income that could be both legitimate and more sustainable. Since the first successful exploration wells were drilled in Puntland in early 2012, the attraction of oil has become a deciding factor in the move away from piracy.
Another important driver in this trend has been the Puntland Maritime Police Force (PMPF), a privately paramilitary force armed and funded by the United Arab Emirates, which celebrated its third birthday in October. Headed by the son of Puntland’s president and allegedly commanded by former South African army officers, the PMPF’s operations up and down the cast have been pivotal in reducing pirate bases on the coast of Puntland; its access to high-tech equipment and audacious rescue missions demonstrate the regional government’s determination to combat piracy.
continue reading on Think Africa Press
By Gary Li – Think Africa Press
Pubblicato da Studi ME Africa a 11:06 PM