Who will make the great Thomas Sankara biopic? 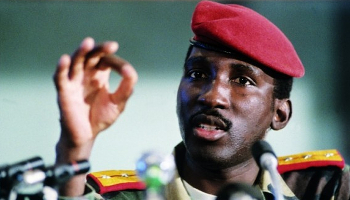 Nov1
Twenty-six years ago this month, Thomas Sankara was brutally murdered. His biopic is still waiting to be made.
A revolutionary leader possessed of a towering intellect and extraordinary magnetism, Sankara had rejected the orthodoxies that still today ensure that African nations are structurally dependent on old colonial powers and their global financial institutions.
Like Che Guevara, Malcolm X, and Steve Biko, Sankara’s appeal (to young people in particular) has endured precisely because his transgressive radical politics have proved impossible to subsume within a liberal narrative which is all about the heroism of moderation and non-violence and is in fact predicated on deep racist anxieties. Martin Luther King Jnr and Nelson Mandela were treated as dangerous pariahs by the Western establishment, but in time their histories have been absorbed in popular culture within a bland politics of respectability based on non-racialism and willingness to compromise.
A Thomas Sankara biopic would work partly because there is no white man in this story (except the various shadowy figures of Francafrique). In “Cry Freedom” (1987) Richard Attenborough managed to present Steve Biko’s life as a story in which the hero is white.
There’s the Shakespearian denouement of the trusted lieutenant (Blaise Compaoré) murdering his great friend, usurping his position and tearing up Sankara’s great social project.
But we don’t want to see a film about what might have been, however seductive that aspect of Burkina Faso’s history is. The point is that Sankara’s visionary politics of African sovereignty and unity — like Lumumba’s — remain as impossible today as they were within the context of international affairs towards the end of the Cold War.
We want to see a film showing Sankara’s commitment to feminism and women’s rights, his environmental projects against desertification in the Sahel, his reform of traditional leadership; a film about how his rejection of “support” from the World Bank and IMF enabled a project of galvanizing Burkinabe society that is unimaginable today where these structures of dependency and Western control have come to be the “common sense” basis for all politics in countries like Burkina Faso.
Recounting the history of great revolutionary figures of the past is a technique for opening up the field of political possibilities in the present. Such a history can be a resource for those engaged in emancipatory struggle and for thinking through the subsequent project of constructing a better society. In 1938 the Trinidadian intellectual CLR James published The Black Jacobins, his history of the Haitian Revolution and Toussaint l’Ouverture. The whole project was addressed to the leaders of the great wave of decolonization that James could see on the horizon, particularly in Africa.
Clearly, the time for a Sankara biopic is now. But who should make it? We threw the question open on Twitter and our followers offered a good number of strong suggestions with a definite Pan-African flavor. Gaston Kaboré, Alain Gomis, Haile Gerima, Frances Bodomo and Tunde Kelani were all mentioned. Others suggested Raoul Peck (who grew up partly in the newly freed Congo inspiring his later documentary and biopic of Lumumba) or John Akomfrah (either of them would be fabulous). Ken Loach’s name also came up. Of course, someone else reckoned this was a job for Spike Lee, but we asked him if he’d take it on and he never got back to us.
And then there’s the next big question: who should play the lead?
The blueprint for the feature already exists — Robin Duffield’s 2006 documentary Thomas Sankara: The Upright Man. Enjoy.
By Africa is a country
Pubblicato da Studi ME Africa a 2:31 PM